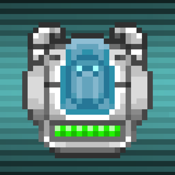 There’s something about the old-style video games of the late 80s and early 90s that continue to appeal to many gamers. Whether it’s a yearning for our youth or simply a love of those simpler times, these games remain popular in the App Store. As I share this love for these old style video games I was definitely interested in giving StarDroid by Krauss & Boll Software a go. The developers of this game bill it as an action packed top-down sci-fi adventure game with some puzzle aspects thrown into the mix as well. StarDroid is a free app and it’s compatible with the iPhone, iPad, and iPod touch.

Helping to Clean the Universe

The premise of this game is an interesting one – the idea is that you're a robot trying to clean up the universe of discarded unmanned spaceships that cause a space traffic jam. They’ve definitely got the graphics right for a retro style video game as this game will certainly remind you of a classic 80’s style game. The app may attempt to re-create the atmosphere of a game like Castle Wolfenstein or the early Doom games, but these games feature tons of enemies to defeat and nonstop action – In StarDroid you can go for long periods of time without ever seeing any enemies, which is a bummer for gamers like me who crave more engagement.

Arguably, the biggest failure of this game was the lack of instructions – it starts off great in the first couple of scenes with a captain providing directions for your robot character in what he needs to do to move forward. Unfortunately, after that, there is very little direction and you’re constantly left searching for answers. The StarDroid app will require 18.7 MB of available space on your iOS device. 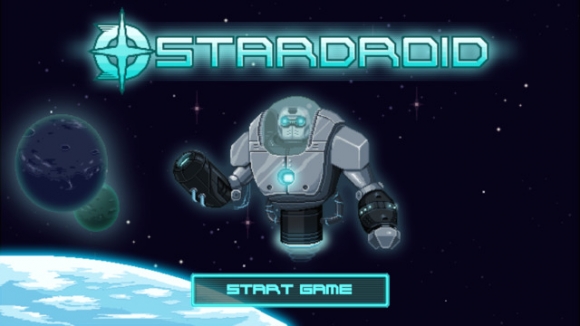 As you begin your adventure, the first thing you’ll have to do is to select a mission, although only the first mission is accessible the first time you play the game. The introductory screen is a brief explanation of how to use the controls and essentially this includes a virtual joystick on the left to move the robot around the screen and a firing button on the right-hand side for firing at enemies that cross your path. The controls are actually pretty straightforward.

The idea is that the robot will move around a spaceship it has boarded collecting coins and defeating enemies along the way. There are arrows located on the floor to direct you as to which direction you should travel and coins to collect as you go. If you run into a locked door you’ll have to search around the level for a key card before you can continue. It’s all pretty straightforward but the problem is there simply aren’t a lot of enemies to make this overly challenging and there aren’t all that many coins to collect – the pace is simply too slow. 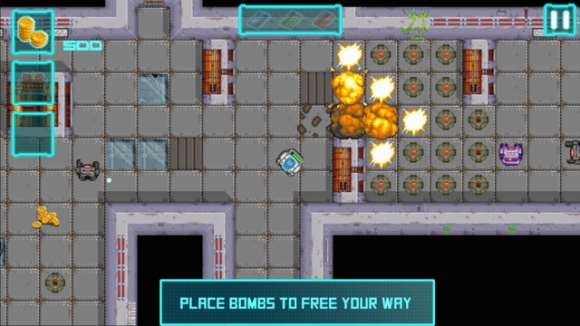 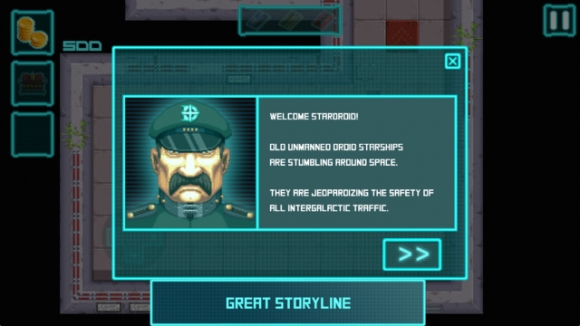 StarDroid is a retro style sci-fi space adventure game with some added puzzle features. The problem with this game is that the pace is simply too slow and there aren’t enough enemies to defeat to make it overly interesting for more advanced or experienced gamers. However, for newbies or the less experiences, this game is a fun option.