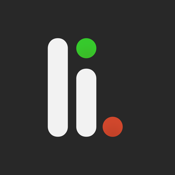 There’s so much video content online these days that it’s difficult to keep track of it all. In fact, I sometimes spend hours searching through the different video streaming services available just to find something I really want to watch. The streaming services have never been quite as convenient as a TV guide which organizes channels in an easy to follow format. That’s where Liveguide comes in – this app was developed to be that missing TV Guide for your favorite online streaming services. It’s a service that the online world desperately needs. This is a free app and it’s compatible with the iPhone, iPad, and iPod touch. 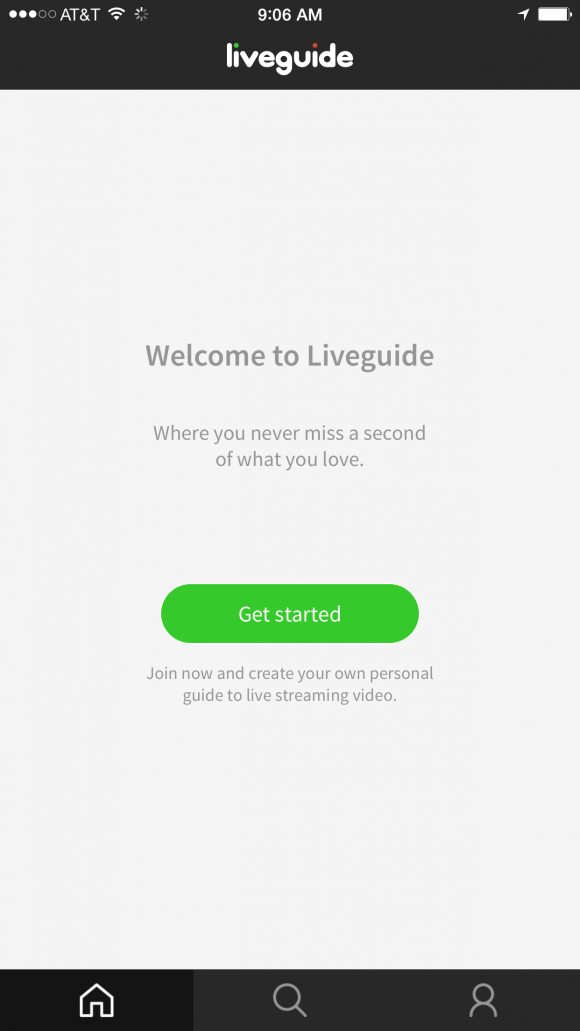 Liveguide was created by a group of Swedish students in early 2014 to address what they perceived was a service that wasn’t really available anywhere else. In fact it was actually a class project if you can believe that. Since that time they’ve come a long way, to the point that in September 2015 Sweden’s TV4 decided to invest in their app. This was critical in providing them with the impetus to take their app to the next level.

They were also nominated for the Stockholm Innovation Scholarship in December of 2014 which helped them to establish their credentials as a viable service. It was that type of recognition that led to TV4’s investment.

This is a company that’s never satisfied with the status quo either and that’s why they recently launched a 2.0 version of Liveguide. According to co-founder Gustav Salomonsson they felt this upgrade was necessary to allow for a more social experience. Unlike a typical TV guide, which is static once you’ve selected your package, with Liveguide you determine which programming is included in your guide and you can now do so with input from other users. The 2.0 release actually allows you to interact and chat with other users in order to recommend channels to each other – it’s now a true social media experience.

They also have one other app in their catalogue Noclip, which is a live streaming guide for gamers. They’ve used this app to launch partnerships with several game streaming services which has also helped to strengthen their brand.

A World of Streaming

My first thought when I found this app was “how is it any different than YouTube?” Well, as it turns out it’s quite a bit different from YouTube. Yes, they are both streaming services, but Liveguide focuses strictly on live streams which offer longer content than you typically find on YouTube. It’s also organized into very specific categories such as news, sports, and entertainment. There are other apps that offer similar services to this one, but this is simple and easy to use which sets it apart from some of these other apps that can be quite complicated.

What struck me about this app was its clean functional organization. Everything is accessed through simple lists and you don’t have to jump through hoops to sign up for the service – in fact you can use your existing Facebook account instead of bothering with any sign-up process. There are no ads or in-app purchases which is also a big plus. This app will require 15.5 MB of available space on your IOS device. 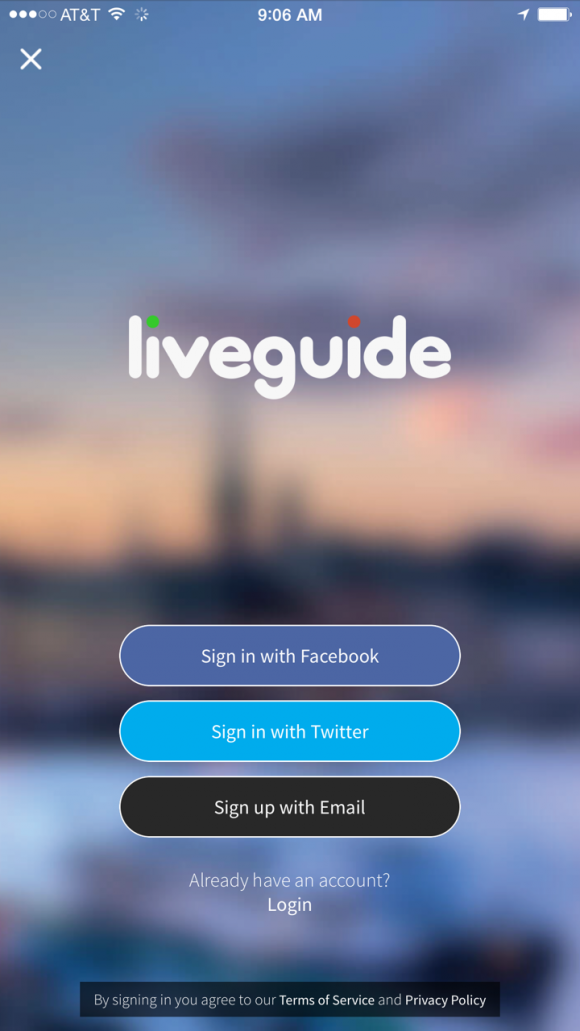 When you run the app for the first time you’ll be prompted to sign up either by creating an account or using your existing Facebook account. I recommend using the Facebook approach as it’s quite simple and straightforward, but of course that’s up to you. Once you’ve signed up using the app is extremely intuitive and they do provide you with some simple instructions to get you started.

After you’ve logged on the first thing you need to do is to add some channels to follow and you can do this by tapping on the search icon at the bottom of the app. As we’ve already mentioned there are quite a few categories such as news, gaming, entertainment, and sports to name a few. All you have to do is tap on a category to view its channels and then tap on any one of those channels to add them to your favourites. These favourites will then be saved to your home page for easy access going forward.

I really liked the smoothness of the video player built into the app. It’s quite seamlessly integrated into the app and provides clear and crisp videos. The only issue you’ll have with this app is deciding which content you want saved in your favourites as there is so much to choose from.

One other feature that deserves a mention is the ability to follow other users and share your videos on Facebook. It transforms the app from a simple guide into a social media tool and let’s face it, we love our social media today. 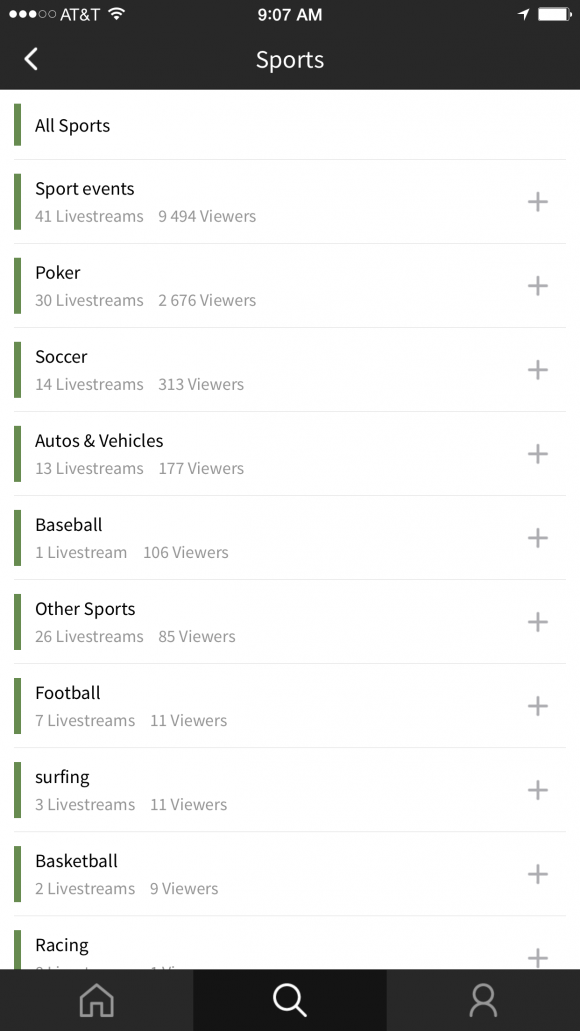 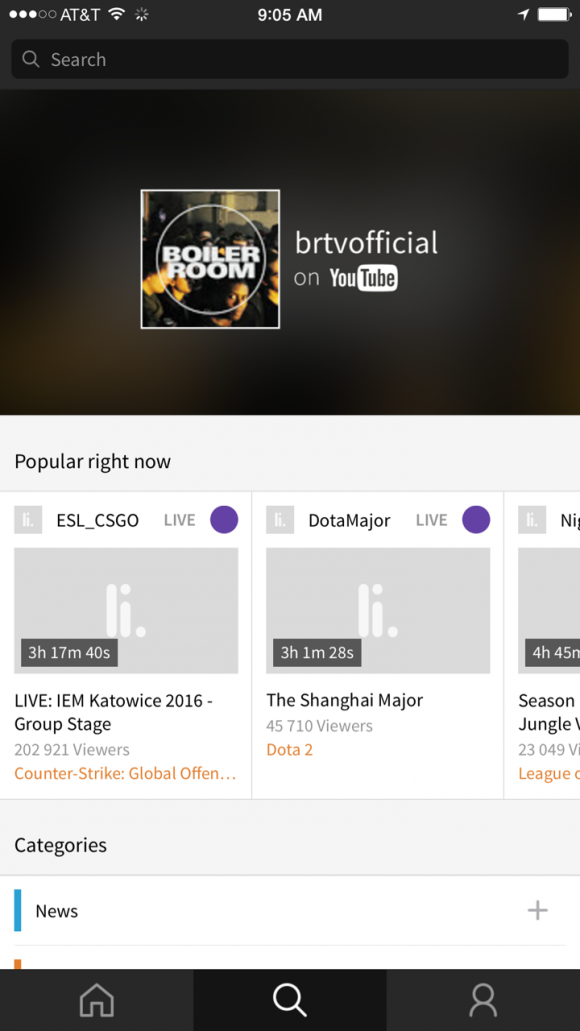 The Liveguide app makes finding and viewing live online streaming content as simple as searching through the guide on your TV. It provides a great user experience through its rich variety of categories and simple intuitive user interface.