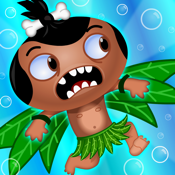 Pocket God by Bolt Creative is a game where you get to play god.

If you were to play god what kind of god would you be? Well in this game you get to decide just that. You have to rule over your islanders and exercise your powers over them to help them progress or keep them living in fear.

Use powers such as lightning, the ability to float islanders in the air, or alter gravity to accomplish your goals. Work your way through over 47 episodes with various objectives and exciting new scenery. There is even a new zombie pack to accompany the latest episode: Apocalypse, Ow!

The newest update includes an all new multiplayer mode which allows you to battle against your friends in an epic showdown of the gods. You can also acquire idols by completing the Challenge of the Gods which can then be used to aid you in multiplayer battles.

I love this game! There are so many great adventures with over 47 episodes and new ones being added all the time. There is also a great little comic on which this game is based.

For: iPhone, iPod touch, and iPad with iOS 5.0 or later