Poos Caboose app review: an immersive and cute game suitable for all ages

The App Store constantly rolls out an ever-growing variety of games for its users. Gameplay ranges from complex RPG storylines accompanied by highly realistic sounds and visuals, to simple puzzle games that will entice people with their vivid colors and other sensory overload. These games can be quite unpleasant after a while, especially as we obsess over getting to the next level and collecting more points and destroying the enemy and getting the next big shiny trophy.

In a world where smartphones are decreasing our attention span, these games are highly addictive by design to maximize their profits rather than provide a user experience that will provide the calm kind of immersion. On the rarest of occasions, I will come across a game that does exactly what it is supposed to do - get me focused, mindful, and absorbed in the present moment without bombarding me with sensory input. Poos Caboose is one such game. 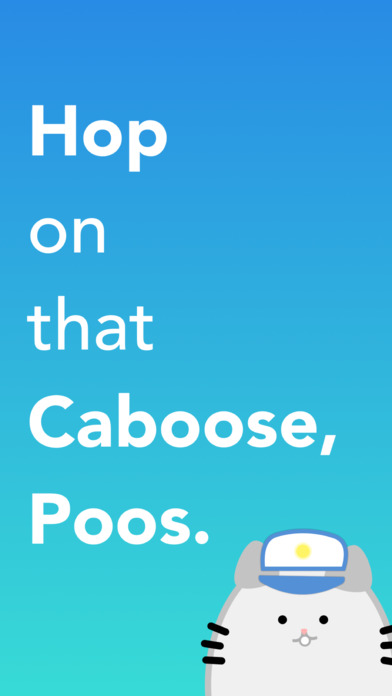 Poos Caboose features a cat named Poos, who is the cute protagonist and the character you are controlling. It wears a hat and has a tooth sticking out of its mouth for extra cutie points. The interface has a soothing blue theme with basic cartoon-style illustrations that are very pleasant to look at, without overstimulating the visual cortex, unlike most games these days, which are all frills, no substance.

When users first open up the app, they will be taken through a 3-screen tutorial that provides them with the simple instructions on how to play the game. The interface is clean and visually soothing rather than excitable like most games that try to draw you in with flashing colors and annoying sound effects. Less is more!

Suitable For All Ages

The gameplay is pretty straightforward here. This is a 2D-scroller, where you, the cat named Poos, are on the back of a train going horizontally, while another train on a parallel track “above” you is travelling the other direction. The mission of the game is simple – to jump up to the next train when the ‘cabooses’ of the train line up. This gameplay is reminiscent of Ice Climber, which I used to play quite often as an NES addict in early childhood.

Each time the cat jumps, you score a point. When you fail to make it, the game is over and you are taken to the scoreboard, where the number of points you earned in your last nine lives (get it?!) will be displayed. Then you begin playing again with one tap on the replay button. 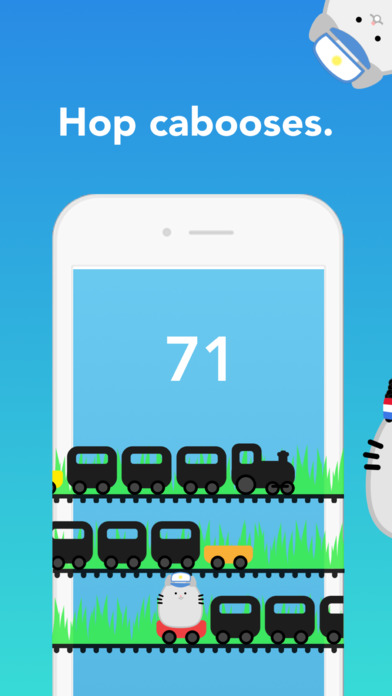 Poos Caboose is such a simple game - the only interaction required between the user and the game is a single tap to make the character jump. At first I could barely make it 5-6 levels without missing the train, and I figured they had just made it irresponsibly difficult to play. But, I wanted to give the game a real chance and so I decided to really set everything aside, including my own meandering thoughts, and focus on getting to the highest level possible. Lo and behold – when I focused my attention, I got better. This was surprising because as an avid gamer, I’ve got pretty great reflexes and usually know within seconds when some games are just impossible right off the bat.

Developer Olivia Brown and designer Miles Anthony paid careful attention to this interaction to optimize the user experience. The game uses Apple’s new Haptic feedback technology, which means that every time I tap the screen and make the cat jump, I create a new haptic and that makes the game feel a bit more real-world rather than programmed to respond in a specific way every time. This attention to detail is exactly the kind of thing that makes this game so immersive.

It is clear that the developers were thinking of the user experience when they designed this app.  Each time you climb a level, you receive a coin. Accumulate enough coins and you can use them to unlock more Poos characters. Just when you think you have collected all the characters, an update will emerge and more new characters will be added to it. 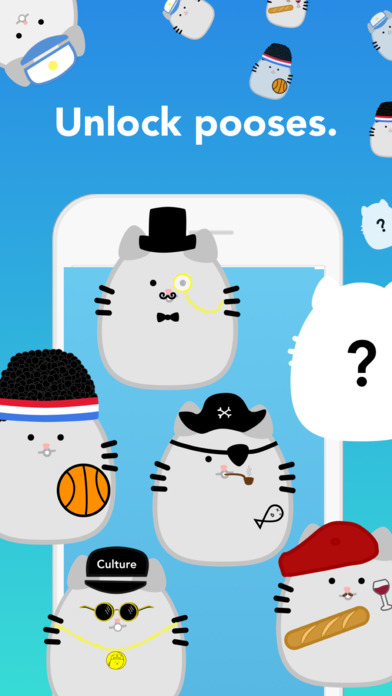 As I played the game, I came to see it as a fantastic vehicle to practice mindfulness. The game demands that you focus your attention entirely on it, not through bright colors or explosions or catchy music, but through the simplicity of its gameplay. A single distracting thought will literally derail you and then you start all over again. The objective, just like meditation, is to keep yourself present and aware, and to gently start over again when the mind starts to wander. This game will bring you back to reality quickly when you start to ruminate over the confrontation with your boss or that silly fight with your girlfriend. 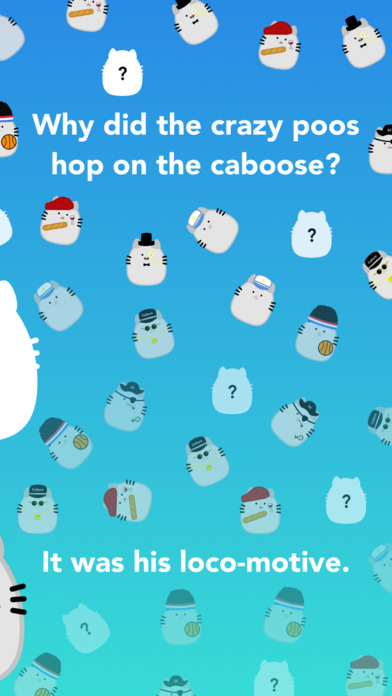 As I continue to play this game, I find that I can reach higher levels, and am earning a whole lot of coins, but the fundamental beauty of the game remains – if I start to get too confident, my mind wanders off, I crash, and I am immediately brought back to Earth. It is as immersive as it gets without bombarding me with sounds and flashy animations.

In a world where smartphones are being leveraged to capitalize on the human tendency to respond to overstimulation, I found that this app has helped me calm down and hone my mindfulness. Unlike other games that can prove to be quite mentally draining and time-consuming, this one leaves me feeling energized and grounded after playing for a few minutes.