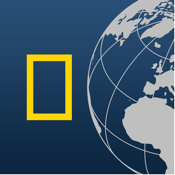 With this app you can now plan a trip on your iPad before using the customized map on your smaller iOS devices. Other features include weather reports, currency converter, and customizable map pins, so you have, at your fingertips, an invaluable tool for planning trips.

National Geographic World Atlas for iPad was updated to version 3.0.2 in early-February of 2013. The current version has a total of 43 customer ratings with an average rating of three out of five stars.

The recent update for 2013 has included a complete visual overhaul, as well as heaps of new features and overall improved functionality. Accuracy has been improved and infographics make a great addition to the Facts and Flags section of the app.

I find the variety of globe styles fascinating. I am one who would spend untold amounts of time just spinning around the world in my hand, looking at random places on the other side of the globe.