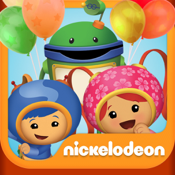 Team Umizoomi Carnival by Nickelodeon is a story adventure app.

Follow along on the adventure with Team Umizoomi as they try to find Jake's missing stuffed animal Bunny. You must follow along and either read or listen to the story as it is narrated by Team Umizoomi. When you are finished the story there are plenty of mini games to keep you occupied.

Following along with the story is a great way for young children to learn how to read. As the child says each word in the sentences they are highlighted so your child knows he or she has read them properly. The mini games are designed to be fun yet educational and there are over 100 high quality animations to keep your child engaged.

The Balloon Pop game is occasionally a nice change from the storyline and lets you play a typical carnival-style balloon popping game. Pop as many balloons as you can in the give time period and win prizes. Level one is simply pop balloons, level two requires you to identify colors, level three is shape recognition, and level four features number groups.

Team Umizoomi Carnival was last updated to Version 1.1 on December 16, 2012 and included some performance updates. There are currently six ratings

with an average score of three out of five stars.

Team Umizoomi was a fun read for my daughter and I. We enjoyed the story with all of its animations and fun sounds. The mini games are well done and fun to play with a bit of an educational side to them so the kids can learn and play at the same time.