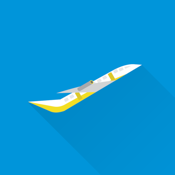 Flight Tracker Free by Smart Mobile Software is an app that is designed to be the only companion a frequent flyer will ever need.

With this flight tracking app, you will have access to a whole host of flight information, such as departure and arrival times, as well as being able to check the status of your flight.

To save you worrying about finding your way around when you arrive at the airport, Flight Tracker Free contains maps to US airports, so you will know exactly where you need to check in, and where your departure gate is.

Based on which type of aircraft you are travellng in, this app will even provide you with a map so you can see the layout of your plane, including the location of bathrooms and emergency exits.

Flight Tracker Free was updated to version 1.4 in early-December of 2012. The current version has a total of 184 customer ratings with an average rating of four out of five stars. Customer reviews are generally quite positive.

I like this app a lot; the layout is simple and bold, and the navigation is intuitive. I am not a long-time user of Flight Tracker Free so I can’t comment on its ongoing reliability, in terms of flight times and statuses, but I like what I have seen so far.

For: iPhone, iPad, and iPod touch with iOS 4.3 or later. Optimized for iPhone 5.