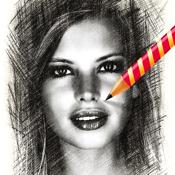 My Sketch by Miinu is a photo editing app that allows you to turn your photos into sketches. It’s marked down half price for a limited time, so get it fast.

The app has rave reviews and has been voted the Top 10 in photography apps in over 15 countries, was featured by Apple, was Top 5 in Paid Photography apps, and is used by more than seven million users on Facebook.

Features of the app include the ability to make unlimited sketches, the choice from more than 20 different kinds of sketches, and high resolution. You also get to adjust the contrast and brightness. You can take photos from within the app or turn existing photos in your Camera Roll into amazing sketches.

You may ask yourself how this app is different from other sketch apps: well, according to the developers, My Sketch gives you a near-perfect, realistic sketch of the image using complex algorithms. Also, you can save the resulting images as a high-resolution file suitable for printing.

My Sketch was updated to Version 2.8 on April 1, 2013. The update added Vintage Sketch, fixed a minor bug, and fixed a crash bug for iOS 5.0 and later. The current version has 39 customer ratings with an average of 4.5 out of five stars.
I have a couple of the sketch apps and some of them really are terrible – or merely adequate. This one, however, really is amazing and I’d recommend it to anyone.

For: iPhone, iPod touch, iPad with iOS 4.3 or later. My Sketch is optimized for iPhone 5.