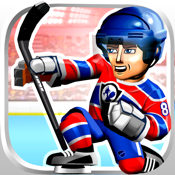 iPad Big Win Hockey, produced by Hothead, is a bit deceiving in nature.  Although it's a hockey game, you are in control of managing the team as opposed to actually playing the matches.  The game revolves around the purchase of player packs in order to fully assemble a team that will conquer other online opponents.  My original expectations were that I would be playing hockey; however, you only have the options to either watch the game or skip to the end to receive the results.

When they are in use during gameplay, the cards glow. Your starter pack also has the uniform color, and then the six player cards that list the names, countries, contract, jersey number, position, and statistics.  You can edit and customize your players after naming your team; the first customization is free and allows you to change the name, jersey number, country, helmet, and skin tone of your players.  As you advance, you can purchase more starter packs (available in bronze, silver, and gold) to receive other players, Big Impact cards, and uniforms.  Furthermore, you can watch the effect of these cards in the matches by viewing them (though you do have the option to skip directly to the results).

That way you can see how the cards determine your outcome. The overall success of your team depends entirely upon assembling the best team with the best Big Impact cards in play during the match.  This game allows you to take on the role as manager; it would be a lot more enjoyable if the user actually had the ability to play the games instead of simply watching them. This isn't one of the best apps for fantasy sports, but it's still fun to play.