Do you consider yourself to be a master seaman? Well now’s your chance to test that. Bowman Battleship allows you to sail a battleship into enemy waters to take on their entire fleet and their air force. This is a decent game but it takes a little bit of getting used to, and the controls aren’t always very friendly. There is a free version of this app and it’s compatible with the iPhone, iPad, and the iPod Touch.

If you grew up playing battleship then you’ll probably want to give this one a try. Beware though the enemies aren’t just on the sea – they’re in the air too. To complete your mission you’ll have to destroy enemy battleships as well as enemy planes. You can’t take too many hits though which makes it quite challenging – two or three at most, so you’ll have to keep your boat moving to avoid enemy fire.

My biggest problem with this one was that the controls are just a little too stiff – they don’t always respond well to the touch. If you release the cannon too soon or too late you’ll miss your target altogether, and this can be quite frustrating. It’s almost impossible to steer your ship out of the way of the overhead planes, and no matter how hard I tried, I couldn’t get the cannons to fire high enough to hit them – even when I switched to anti-aircraft fire!

One other thing that really takes away from this one is the overwhelming use of ads in the free version. Not only do they pop up every time you try to start a new game – they don’t allow you to close them until the ad is complete. You have no choice but to be a captive audience. This app requires 81.7 MB of free space on your IOS device. 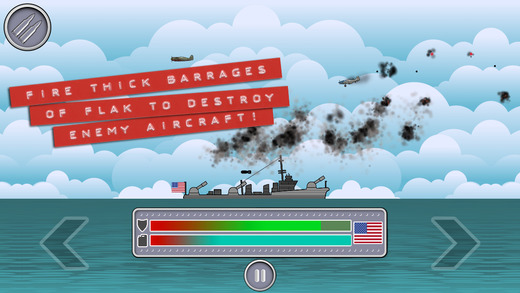 When you first launch the app you have a choice of games: survival, campaign, 2 players on the same device, or 2 players over a network. You can also choose what countries flag you wish to fly on your ship. I started out with the survival option and found it pretty challenging. It’s not really the enemy ships that are hard to kill, it’s the planes. To shoot you tap anywhere above the waterline and pull back and release – much like you would if you were using a sling shot. You have two types of weapons: ship to ship missiles, and anti-aircraft fire. There’s a button on the top left you tap to switch between guns. In order to move your ship you simply tap on the arrows below the waterline.

I wasn’t overly impressed with the controls on this one. The ship didn’t move very fast, and the guns were just a little too sensitive and hard to control. I was able to take down the occasional plane, but I think that was more blind luck than anything else. I would rate the gameplay as just okay. 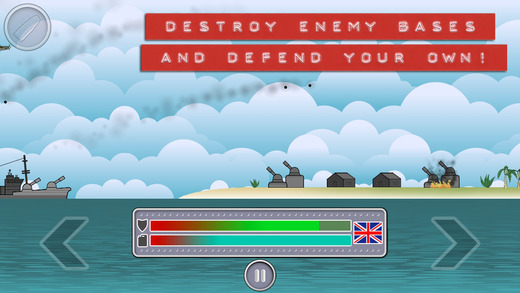 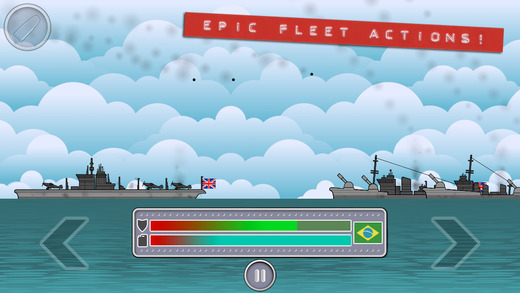 If you’re a big fan of warfare on the high seas, then this one might be of interest to you. Otherwise it doesn’t really stand out. I’d rate it as average at best.