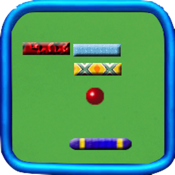 Brick Madness app review: an iPhone game that will remind you of Pong

Brick Madness is an iPhone game that is modeled after the old school paddle and ball game. There are four kinds of bricks for you to work around and destroy, and the game brings back the memories.

Brick Madness is an iPhone game that reminds me very much of playing games on my aunt’s computer back when I was a kid in the ‘90s. There’s a paddle that you must bounce the ball off of, and since the technology is better than the joystick that came with the old Commodore 64, this game works by tilting the phone to move the paddle. One issue I had was that you have to tap the ball to get it to start moving. This flings the ball of in nearly any direction, which makes it pretty darn tricky to actually get the ball on the paddle.

Fortunately, once you catch the ball the first time, it turns into the game I remember. Tilt the device to slide the paddle over, and then bounce it back up to the bricks to destroy them. The red bricks are normal so just hit them once and they’ll disappear, the green ones give you five missiles to launch, and the yellow with green ‘x’s give you an extra life. There are also gray steel bricks that you have to avoid, or alternatively you can use them to direct your ball towards the remaining bricks.

Brick Madness has many different levels. There are also hack levels if you triple tap in the bottom corner. I didn’t get a chance to try this because I was busy trying to catch the ball when it first launched down on the paddle. I did watch my son play the game for several minutes though because he’s better at videogames than I am. Even he had trouble with the tap to launch system.

He did enjoy the game overall though, and he commented that the many levels made it interesting. He also commented that he couldn’t get a certain kind of block to break, but then he realized that it was his life counter. It appears at the top left of the screen in the form of extra paddles, and it can be a bit distracting to the bricks that do need to be destroyed. Not horrendously though. 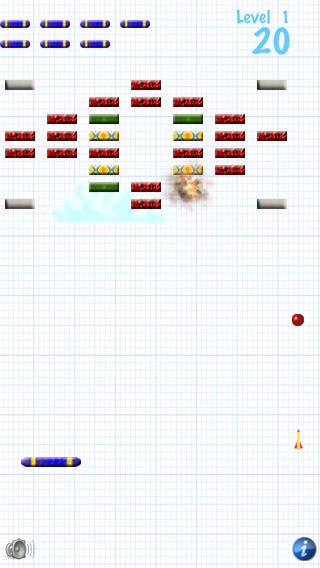 Brick Madness is an iPhone game that will remind you of playing brick smashing games with paddles back in the early ‘90s. It was one of the first computer games I played, and this app reminded me of it completely. I loved showing it to my son and reminiscing with him about my childhood. Overall, the start-up launch is a bit hard to manage, but otherwise the game is very fun to play.