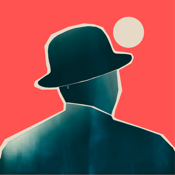 The great thing about social networks, other than the social interaction of course, is that there’s always something new and fresh on the horizon. No matter how big of a phenomenon the social network seems to be, it’s almost inevitable that eventually something will come along to replace it. In the late 90’s and early 2000’s IRQ Chat and MSN Messenger were extremely popular, then came My Space, and today we have lots of choice such as Facebook, Twitter, Instagram, and Pinterest. As strong as this latter group of networks seems at the moment, those earlier networks such as My Space seemed just as strong in their heyday – nothing lasts forever. There’s always going to be a new contender looking to knock the big boys of their perches.

One new entrant looking to do exactly that is Narrator. This unique social network requires it’s users to interact with others in the form of short 30 second audio clips – it’s sort of like an audio version of Twitter. While this is an interesting idea for an app, unfortunately this one still needs a lot of work.  The Narrator is a free app and it’s compatible with the iPhone, iPad, and iPod Touch.

There are certain things we’ve come to expect from our social networking apps – we expect them to allow us to interact with other users in a robust manor, we want to be able to leave our own commentary, and we want to be able to express our like or dislike of other postings. Twitter, Facebook, and Instagram all employ these types of tools in some form or another. Narrator just doesn’t measure up to these other apps in most of these categories, which is really too bad because the developers have a great idea here.

One of the biggest issues I had with the Narrator app, apart from its lack of some essential features, was its lack of any real instructions. The only way to figure out how this one works is by trial and error – it’s a little frustrating. There also doesn’t seem to be a lot of users using this app, I was able to scroll through the entire news feed in about 30 seconds and less than half of the comments where in English which makes me wonder why the app asked me to choose my language if it wasn’t going to filter out the others. The other thing I didn’t like is that there doesn’t seem to be any sort of login or password which suggests that if you wanted to use this app on another device you’d have to create a completely different profile. The Narrator app will require 2.2 MB of available space on your iOS device. 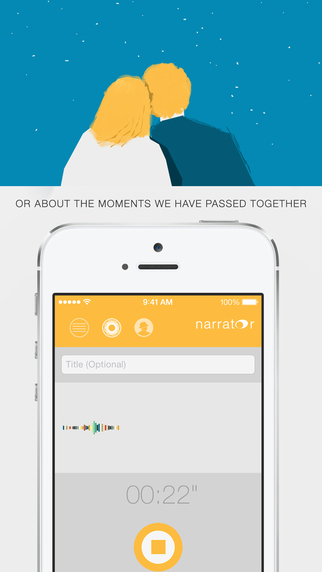 When you open the Narrator app you’ll see a very simple interface with only a few different tools. At the top of the app are three icons – the first takes you to the news feeds, the second is where you make your own 30 second audio clips, and the third is where you can make changes to your profile. The news feed is divided into two parts – a section where you can follow the posts of those you have chosen to friend and a general section. Basically all you can do in these news feeds is listen to other peoples posts, you  can’t leave any comments and you can’t favorite a post – it’s quite disappointing. Making your own clips is a simple process you simply tap on the record button to start recording and then tap on the checkmark to save your post. Creating your profile is also pretty simple – you can enter a name for yourself and chose a picture for your profile. That’s it – there just isn’t a lot of detail. If you’re looking for the next big thing in social networking Narrator is probably not it. This app has a great deal of potential, but its lacking in too many fundamental tools to have much success in its current form. At the moment this is probably one you’ll want to take a pass on.