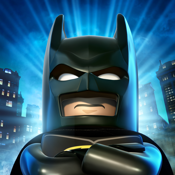 LEGO Batman: DC Super Heroes by Warner Bros. is a fantastic game for your iOS device featuring all your favorite DC super heroes.

Do you love Batman? How about Green Lantern, Wonder Woman, Superman, The Flash, Green Arrow, Cybork, Hawkman, and other super heroes? If so, then you need to get this game and battle against Penguin, Harley Quinn, Cat Woman, Poison Ivy, The Joker and Lex Luther. You need to stop them from wrecking Gotham City.

The game is chock-full of LEGO videogame action and laughs.

There are 80 playable characters; some are unlockable as you play, or you can make them immediately available through in-app purchase.

You’ll get to play with super suits, super abilities, and super gadgets!  Play with Robin’s Hazard Suit, Batman’s Batarang, and use Superman’s Heat Vision and Freeze-Breath abilities to help you win.

The game is built to take advantage of the Retina graphics. It’s also Game Center integrated with achievements and leaderboards.

LEGO Batman: DC Super Heroes was released April 25, 2013. The app is available in English only and is rated for kids nine and up. It has 27 customer ratings with an average of four out of five stars.

When I saw this was available for purchase, I immediately downloaded it for my iPad. I am a big-time super hero fan and LEGO is a fave of my daughters so I can imagine we’ll spend hours of fun playing this together.