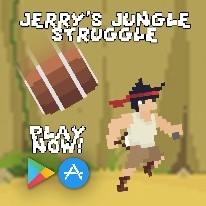 Survive the rumble of the jungle struggle. Jerry’s Jungle Struggle is created by the new thrilling game studio Desert Beagle. Barrels are pouring down on the adventurous Jerry, armed only with his trusty slingshot, some rocks, your razor reflexes, and maybe a smidgen of luck. Find out how long you can survive the jungle struggle and grab the top score!

Players use their fingers to run Jerry from side to side and shoot rocks at the barrels coming down. You only have a few at a time, so use them sparingly. Aim for the coloured ones to clear the air a bit while avoiding the invincible steel ones. Dodging around is fun, but to really rack up those points, hit the blue, red, and especially the rare green barrels for big bonuses. Challenge your friends, family, in-laws, co-workers, barista, dentist, accountant, Dave you met on the street once, walked home with you, and is now living on your couch because he’s between houses, only for a couple of nights though, mind. Except it’s been three months now and you’ve just accepted him as your new flatmate because what else are you going to do at this point? Well, challenge him to beat your score in Jerry’s Jungle Struggle, of course.

Follow Desert Beagle on social media to get the latest info about new releases, updates and potential early access!

Desert Beagle originated from a group of university students working on the project ‘Bad Hair Day’ in VR during late 2017. Once the assessment was completed, the director of ‘Bad Hair Day’, Jake Carter, lead the next project, ‘Full Throttle Demolition Derby’, with several new additions to the group for the final project of 2018. Upon graduating, three of the five members, Jake Carter, Joshua Jennings, and Jesse Martin, remained together and formed ‘Desert Beagle’ in July 2019, still developing games to this very day.