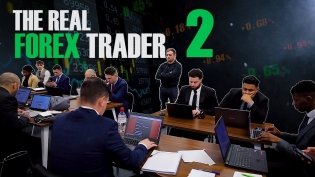 Samuel Leach, CEO, and founder of Samuel & Co Trading leads and designs a series of foreign exchange trading (also known as forex, FX) education initiatives. His company Samuel & Co. Trading, launched in 2012, uniquely offers up-and-coming traders with initial capital to trade with. Among Leach’s programs include The Real Forex Trader Series 2. This program is a Youtube show where inexperienced foreign exchange traders compete in London, England for a grand cash prize. The most recent episode was released on June 17th and was the first look at the competitors beginning to FX trade. Titled 1st Day Trading, the episode provides insight on how each competitor’s success in the game thus far impacts their trading.

All About the Real Forex Trader Series 2

On Wednesday, April 29th, Samuel & Co. Trading’’s YouTube channel launched The Real Forex Trader Series 2. The program takes place over four weeks in the United Kingdom and was filmed in early 2020. Those who tune in to The Real Forex Trader Series 2 can learn from the show's extreme intellectual challenges. It is also an extremely helpful resource for those looking to break into the foreign exchange trading markets.

Samuel & Co. Trading selected eighteen applicants to complete in the Real Forex Trader Series 2. Yet the competition’s beginning stages did not substantively focus on trading. Leach instead chose to coordinate challenges that highlight each participant’s work ethic, emotional strength, and professional development. Throughout the series, participants receive guidance from Samuel Leach and a team of experts on how to reach their potential.

The Real Forex Trader Series 2’s earlier challenges sought to holistically evaluate each competitor. Ultimately, Leach intended to ease the competitors into the foreign exchange trading markets. He also chose to get to know each competitor on a professional and personal level. This perspective would allow Samuel & Co. Trading to establish whose work ethic is best positioned for the high-stress markets.

In one of the first episodes titled Interrogation, Why You? Leach and his staff sat alone in a room with each competitor. Samuel & Co. Trading employees asked each participant about their life experiences (childhood, education, family, career, etc.) and how these inspire the competitor to win the competition. Leach then placed the remaining competitors into two teams for a Cash Raise Challenge. For this sales challenge, both teams designed a strategy to generate cash-profit margins for charity. Leach explained that the questions a trader asks themselves about exposure, profit margins, and risks are exactly the same considerations put into creating a sales strategy.

Putting the Forex in The Real Forex Trader Series 2

In the most recent episode of the Real Forex Trader Series 2, Leach announced the Cash Raise challenge winner. Although the winning team generated 400 GBP more in profit than the losing team, both teams walked away raising more money than they invested. Leach explained the similarities between the Cash Raise challenge and foreign exchange trading by warning that “you can put in a long shift and feel like you’ve worked hard and still not make a profit.” Aspiring foreign exchange traders should beware that hard work does not always pay off. The most successful foreign exchange traders, Leach implies, are those who are patient and humble.

After the Cash Raise Challenge concluded, the following and final team-based challenge went underway. Each team hosted a stock report presentation for Leach and a staff member. They identified a series of stocks and their respective strengths, weaknesses, opportunities, and threats. Once the Stock Report challenge concluded, three competitors were eliminated. Eight competitors moved on to the competition’s first trading challenge.

The first-day trading challenge involves trading with a demo account of 2,000 GBP. Leach introduced this challenge by explaining his rationale behind starting the traders off with 2,000. Leach explained that “if you can’t deal with the emotions of 2,000, how are you going to deal with 100,000? You need to be comfortable with the 2,000 before you go to larger figures.” He concluded the announcement with explaining his expectations, or lack thereof. Since this is only the first trading challenge,  Leach would rather the traders “experience tasking risk and making money from it”

Attish, a senior coach at Samuel & Co. Trading for five years, hosted a series of training sessions to prepare competitors for the upcoming trading challenge. Attish expected that those who do not have any trading experience whatsoever would perform best in the upcoming challenge -- “ “My money is actually on you guys to probably do better because someone like yourself won’t have any bad habits or would’ve read any false information.” This emphasizes the need for upcoming traders to build a solid foundation. Attish believes that absorbing core principles and focusing on theory-based technicalities will best position competitors heading into the first trading challenge.

Leach’s methods have as widespread of an appeal as they did eight years ago when he first launched Samuel & Co. Trading. His education initiatives thoughtfully bridge human psychology, personal habits, and practical experience to advise traders of any expertise level. Leach’s system generates consistent returns. His programs also offer traders with initial capital to trade with. This results-driven model allows traders to make money as quickly as possible. For example, Samuel & Co Trading’s Junior Trader Program, one of Leach’s most popular programs, uniquely offers participants the chance to cash out up to 20,000 GBP.