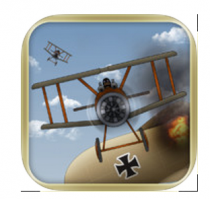 Dublin-based gaming firm Greedy Robot has launched its first game for Apple’s iPhone, joining a new generation of Irish start-ups that have successfully penetrated a dynamic global market.
The game, Air Ace, has been in development by Greedy Robot for over a year. It’s the brainchild of software programmer Ciaran Mitchell, who has worked in the past for a number of Irish and international technology companies and financial institutions.

Air Ace is a humorous and highly addictive World War One aerial combat game, featuring a cast of characters including the moustachioed hero, Percy Plantagenet Sommerset-Smythe.

With machine guns and bombs at the ready, players follow Percy’s adventures in stunning graphics through the Western Front, the frozen hell of an Eastern Campaign and all the way to the searing heat of the desert.
Contending with aerial targets along the way, players must pulverise ground targets from trenches to bunkers as Percy braves bruising battles in his trusty airplane. His commander, Major Barkington, guides Percy as he navigates the road to victory!

Earning points as they go, players can us them to purchase upgrades from machine guns to flame throwers to give the enemy a real thrashing.

“It’s an exciting time to be part of the Irish gaming scene,” said Ciaran. “Ireland is fast becoming a major part of this international business and a number of indigenous firms are already proving that we have what it takes to compete successfully. The only limit is your imagination”. As Air Ace joins burgeoning Irish online gaming scene, Greedy Robot is hoping it will become a popular favourite on the iTunes App Store. It will soon be available for additional platforms.

Add to Flipboard Magazine.
Staff Reviews
Air Ace app review: take to the skies to help in the war effort