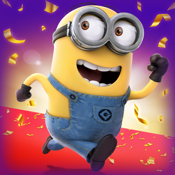 Like so many apps in the AppStore, Despicable Me: Minion Rush copies the gameplay style of other extremely popular games. In this case, Minion Rush is modeled primarily after three games in particular: Subway Surfers, Mirror's Edge, and Temple Run. If you are at all familiar with these games, you know that they all consist of your character running while you swipe or tilt to avoid obstacles. This is exactly what the objective in Minion Rush is, and the game switches nicely between the different styles of gameplay seamlessly as you reach certain points along your path.

Though this game does copy the game style of other games, Gameloft was able to incorporate enough unique and new content that it should keep you plenty entertained. For example, as your character (an adorable little Minion) successfully passes certain distances, you encounter secret areas, unique boss fights and amazing power-ups. Gru’s Lab, Gru’s Residential Area, El Macho’s Lair and the Minion Beach are all included locations to run through from the movie, but you have to start in Gru's Lab and unlock the other locations from there. Using the bananas you collect while running you can customize your Minion with unique costumes, weapons, and power-ups. If this process of raising 'revenue' is too slow for you, you can acquire tokens through in-app purchases which can be used for buying more bananas, reviving your minion, or skipping goals.

As someone who has played tons of other endless runner games (Subway Surfers, Monster Dash, Temple Run: 'Brave', Jetpack Joyride, Mirror's Edge, Agent Dash, and Temple Run 2…you get the point), I was initially a little put off by the style of this game. However, since I am a HUGE fan of the Despicable Me movies and this game was free, I eventually decided to give it a try. The story behind the game, trying to win the title of "Minion of the Year", did little to make the game more interesting for me. Surprisingly it was the little things (the voiceovers, the scenery, and the minions actions) that really helped draw me into the game and want to keep playing. The goals/achievements also helped make the game fun and interesting though after a while they got a little repetitive.

This game is perfect for anyone who is looking for a new endless running game as well as fans of Despicable Me. Younger kids will especially like this game and all it has to offer, while older people might tend to think it is too kiddish after a bit. Ultimately, if you are wondering whether to download Minion Rush, with a price tag of free it won't hurt to give this app a try.