The Official U.S. Navy App app review: everything about the U.S. Navy in one handy app

In the United States of America, there are tons of different government organizations with their own app. Of course the U.S. Navy can’t stay behind and have contracted a company called InterMedia Development Corp to create an app that would be superior to all other apps. I can tell you that with The Official U.S. Navy App, this developer has succeeded as this is an all-encompassing app that covers everything you can imagine that has to do with the United States Navy. It holds information for the sailors, their families and the national public. The Official United States Navy app is developed for both iPhone and iPad and is just under 20 MB. The app is available completely for free.

Where do I start on this app? The app has so much to offer that it’s hard to fit it all in this review. First of all, the app has a news section where you can see all the latest news that has something to do with the U.S. Navy. On the main page of the app you can also see the top videos of the Navy and on this page you can also find the top stories, best photos, a magazine, a link to the live blog, and a video archive. Last but not least, the app also features a full-fledged map that shows you where all the fleets are currently located, what the time zones are and the location of all other naval buildings all over the world. 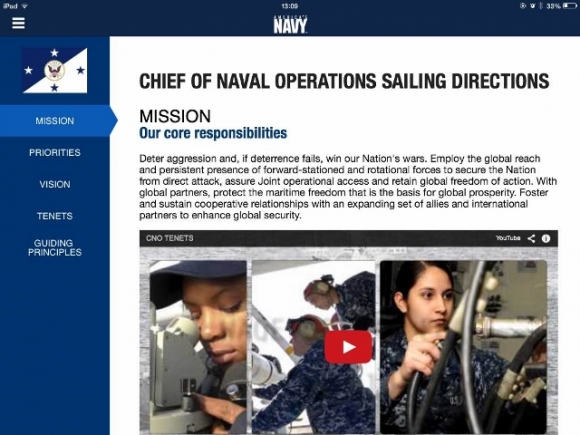 What does the navy do?

The design of the app is one of the best I have seen yet. I explained the main page in the previous paragraph, but that is just the tip of the iceberg. On the left side you can call up a navigation pane that allows you to access other parts of the app as well as all the social media sites you can imagine. You also see contact information for the navy. There is also some app customization, where you can select which topics you are interested in, and which topics you’d rather not see. The only downside I can find now is that the calendar in the app isn’t populated yet, but I’m sure that will be done in the next update. 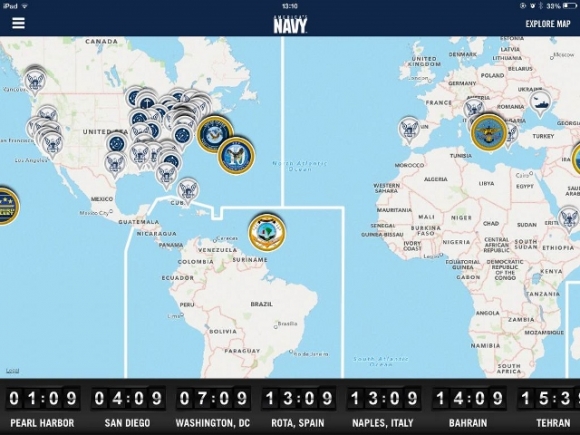 As far as government apps go, this is by far the best that I’ve ever seen. Anyone who is interested even in the slightest in the movements of the U.S. Navy should have this app on their device, simply as you can customize the app in any way you see fit. The app is compatible with both iPad and iPhone and is just under 20 MB.