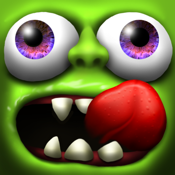 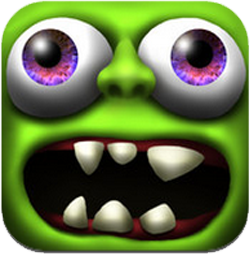 Zombie Tsnunami Price: Free For: iPhone, iPod touch, iPad The Zombie Tsunami app by Mobigame is a free game app where the zombies are revolting, and you’re one of them. You have to move through the streets, adding zombies to your horde to become a zombie tsunami! You start out with one zombie in this side-scrolling game, chasing down and biting as many humans as possible to add zombies to your team. The more followers you collect, the more power-ups and bonuses you will have the chance to devour. As long as at least one zombie is still running, you will stay “alive” in the game. You get to turn over cars and buses to get at the survivors. Choose from among seven worldwide locations and complete 60 missions . The app is optimized for Retina screens and all models of iPhones, iPod touches, and iPads with iOS 3.0 or later. The app description says it’s fun for the whole family, but unless you allow your four, five, or six year old to play as a zombie going around eating people, it’s probably not the best idea to let your young kids play without you checking out this app first. Otherwise, it’s full of flesh-eating fun! 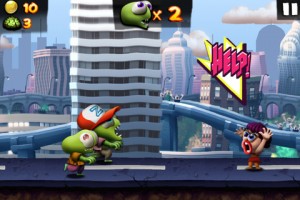 The app was updated to Version 1.2.0 on August 12, 2012. The update gave us enhanced graphics and made the app more stable for older devices. Zombie Tsunami comes in English, French, German, Italian, and Spanish, and is rated 4+; but as mentioned, it may not be suitable for some kids. That’s up to your discretion. The game has 3648 ratings of all versions with an average of 4.5 stars out of five. This version has 3347 ratings with an average of 4.5 stars as well. There are several in-app purchases, ranging from 5,000 coins for $0.99 and 300,000 coins for $29.99. The customer feedback is pretty good.