If you tend to post frequently on Twitter then you might like to check out Birdhouse for iPhone and iPad as it acts as a handy offline notepad where you jot down your thoughts and ideas while offline before posting them to Twitter later on, all from within one single convenient interface.

This is a great idea for an app, and although I don’t really use Twitter myself I would definitely recommend it to those of you who do post on a regular basis, especially if you have multiple Twitter accounts.

Making a great contribution to the Social Networking category of the App Store is Birdhouse, which is essentially offline notebook for your Twitter account, or rather, Twitter accounts; you can add as many accounts as necessary!

This gives you a quick and easy of noting down your thoughts for future tweets while you’re offline, and there is also a 140-character limit on the notes to ensure you never end up having to edit your posts later on to get down to the limit. 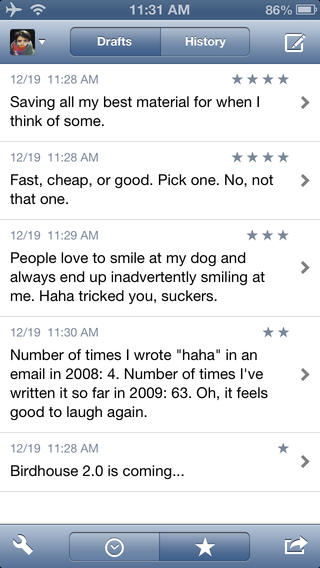 Back Up Your Notes via Email

Birdhouse obviously allows you to save your notes as drafts for posting at a later date, and you can save your notes to be posted onto Twitter whenever you need to, plus you can use the star-based rating system to more easily organize and order your draft posts.

What’s more, you’ll be pleased to know that you can also create a handy digital backup copy of your notes by emailing them to yourself, so you won’t have to worry about them getting lost anytime soon! 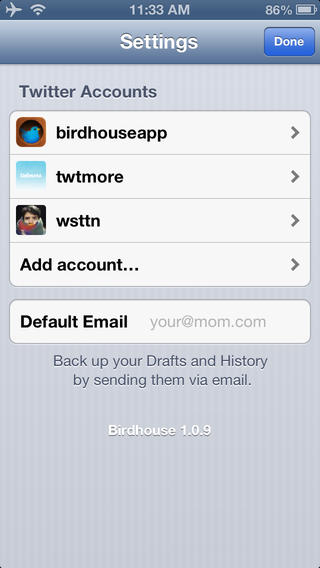 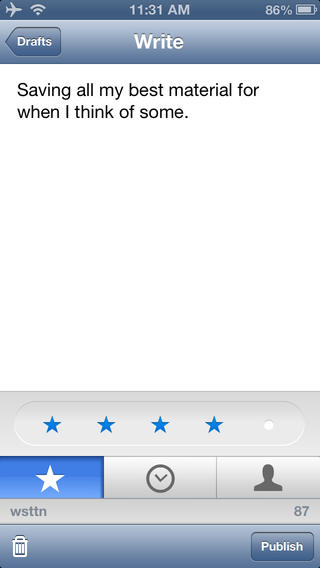 Birdhouse is slick, simple, and very easy to use, so all of you tweet-o-holics out there will definitely want to download it so that you can write offline notes that always adhere to the 140-character limit.