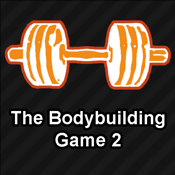 Who says you have to hit the gym daily in order to see results...well, at least virtual results. The Bodybuilding Game 2 app can be played on your iPod touch, iPad, and iPhone and gives you a way to perform all kinds of exercises and see the results virtually. No, you don't have to hit the gym to use this app; in fact, you can be playing while you relax on the couch. It’s your virtual character who will be doing all the heavy lifting and showing off the results.

The best fitness apps for the iPhone

Have you ever wondered what it takes to get that bodybuilder’s physique? Here’s a chance to unlock the mysteries with The Bodybuilding Game 2 app. It will require your character to take part in a number of realistic exercises that will provide results. There are 12 different exercises that your character can perform and just like in real life they all affect a number of muscle groups at once. Even though this is just a game it's cool in the sense that you get to know what exercises are actually needed to build and tone your muscles.

The app was released more than three years ago and still hasn't had any updates and its price tag although not high does seem like too much. It has three out of five stars from users who clearly aren't blown away by it. Sure it’s cute and fun but at the same time it’s rather under-whelming in terms of the graphics, features, and tools. Customers have called it boring, pointed out that is should be free, and are saying that there isn't enough content.

Perform a variety of exercises

Building Muscle and Playing the Game

In The Bodybuilding Game 2 you will be performing all these exercises through real simulation of your character. As discussed, your results will start to show up as you build more and more muscle. Just like in real life each of the exercises focuses on a different area and will burn different amounts of calories. You need to think about these stats as you choose your workout regime.

I feel like the app really lacks in details meaning the graphics are pretty basic, the user interface is beyond basic, and there really aren’t that many exercises. There is statistic tracking of your level, weight, and progress which is a nice touch at least. The concept is cool and fun but the execution is sub-par at best. 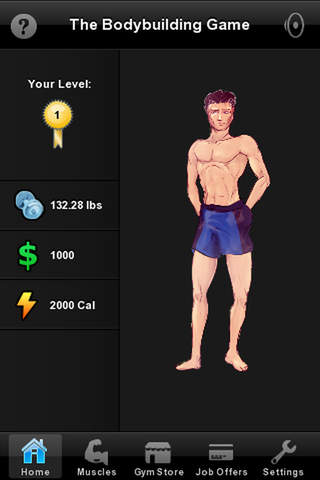 See the progress and results on your character 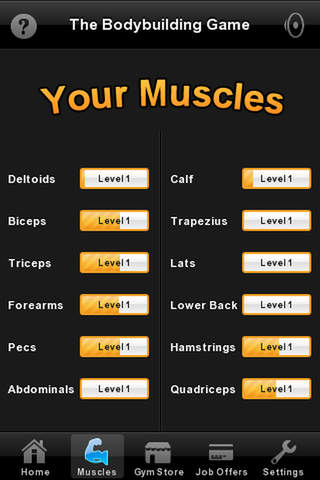 The Bodybuilding Game 2 app for your iPod touch, iPad, and iPhone is a fun idea that just fails to impress and follow through in a way that will engage players.