With the advent of technology in the field of astronomy, we know more about the Red Planet, Mars, than ever before. Mars Atlas is an astronomy app for the iPhone and iPad which lets you explore the surface of this planet.

What we have here is a 3D, interactive model of the planet with gesture-based controls that resemble Google Earth, except it's for Mars!

Not only will you be able to pinpoint locations of the surface of the planet, but you'll also be able to zero in on the location of the probes sent to the planet by humans through this cool Mars guide app for iPhone.

Check out our Mars Atlas app review for more details about this Mars app for iPhone.

The Mars Atlas app for the iPhone and iPad has a very simple and easy-to-use interface. There are four sections of the app which can be accessed using the navigation menu at the bottom of the screen. Sections include Map, Phase, Search, and Settings.

The Map section is the highlight of this app, which features the 3D globe of Mars. You will find labels on each of the geographic bodies of the planet's surface and as you pinch-to-zoom into the surface, you'll find more labels emerge. When you tap on any of the labels, you'll receive a pop-up with some information about that feature. 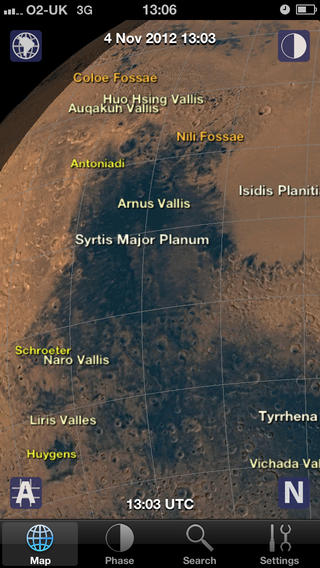 The Phase section of the app shows the phase, axial tilt, and central meridian of the planet from any location that users choose, along with any time. These parameters are rendered on the globe if you switch to Globe mode.

Users can also use the Search feature to look for a particular object on the planet's surface. For instance, if you want to know where the Curiosity rover is located, then you can search for it, and it will show you the spot on the globe where it is located.

There are over 1600 features included in this app along with the six spacecrafts that have collected and sent back data from the planet's surface. 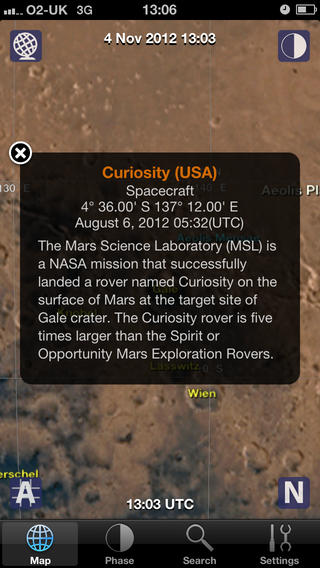 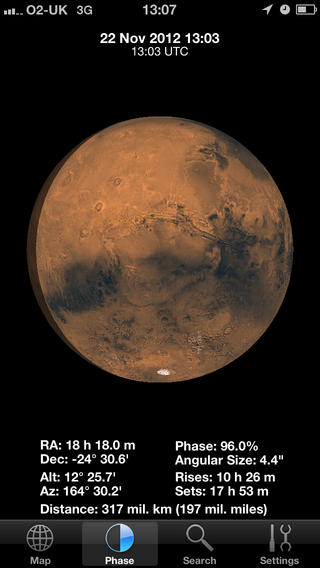 Mars Atlas is an outstanding app which fully utilizes the slick iOS interface to bring you an interactive map and globe of Mars straight to your iPhone or iPad. A must-have app for amateur and hobbyist astronomers.