Thanks to today's technology paper forms are becoming less and less prominent and this app is yet another solution in eliminating the need for paper. The Easy Release app can be used on your iPod touch, iPad, and iPhone and is a professional product that is actually able to replace property release and model release forms that are used by professional photographers. Now when you’re out on the field on a shoot there’s no need to rummage through all your files and papers to find the right forms because instead you’ll have this handy app.

If you’re a professional photographer then you likely deal with paper model release and property release forms all the time. It can be a hassle, time consuming, and just frustrating to have to constantly carry around those forms. The Easy Release app acts as a solution to this problem and can actually replace the need for the paper versions of the forms. This app has been designed to be quick and easy to use while at the same time being very sleek and conveying the professionalism of your business.

The app went through some small bug fixes earlier in the year and now offers smoother performance. There are a couple of in-app purchases available that range in price from $1.99 to $3.99. Users are incredibly impressed with this offering and have given it 4.5 out of five stars. The one complaint users have is that it isn't necessarily user-friendly and that there is a learning curve involved with this offering. 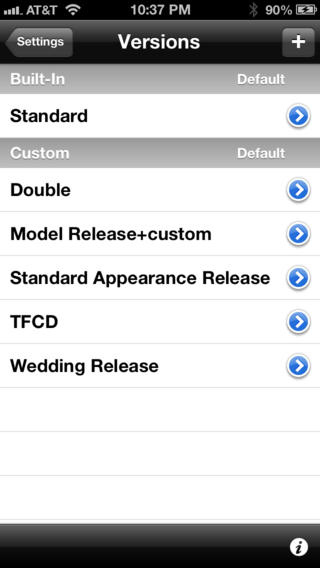 Set up your release form

The End of Paper Releases

So can the Easy Release app really be the end of paper release forms? Well that's really up to you and your needs. This app allows you to import witness information and mode information from your contacts, collect the information and signatures at the job and then email the release to yourself by JPEG and PDF, and it even comes with a collection of standard property and model release forms in 13 different languages. You can customize the legal text, add your own logo/header/contact information, and you can take a picture and 10 embed an ID photo into the release itself.

It's one of those tools that you'll need to put a bit of time in to learn and get accustomed to but once you do there's a good chance you'll never want to go back to traditional paper release forms again.

There are plenty of customization tools 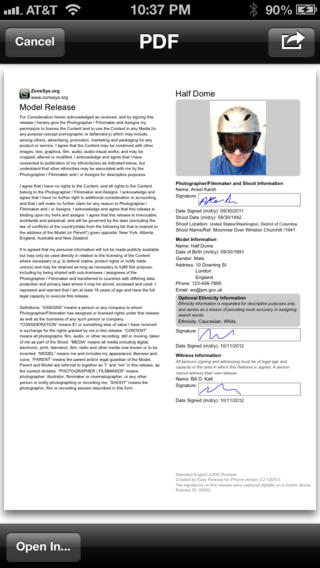 The Easy Release app for your iPod touch, iPad, and iPhone delivers a useful tool to professional photographers that offers a large variety of customization tools.