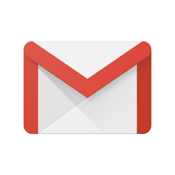 Gmail by Google is an email app for your iOS device. It’s not new, but Google has just released its 2.0 version, which adds multiple account support, search predictions, and an all-new look.

If you previously tried the Gmail app in the past and were underwhelmed, you might want to try it again. The overhaul addresses criticisms Google received after the first version was released. This go-round has an all-new feel and look to it, with profile photos or gravatars included in messages, infinite scrolling in your message list, and new animations. This Gmail app is a terrific email organiser app and a must have for all Gmail users.

Now you can check up to five different accounts, compared to the one account on the previous version. The app is also more integrated with Google+, with the ability to do “+1” approval and commenting from the app.
You’re notified quickly of any new mail, you can read your mail in threaded conversations, and you can respond to Google Calendar invites from inside the app. The update added predictions so you can type quickly and search all of your mail much quicker. One of the coolest features is that you can attach scribbles or photos quickly and easily to your emails from your iOS device.

You’re also able to label, star, delete, report spam, archive, and send and receive messages. For Gmail users, this is the best email app for iPhone and iPad.

Gmail was updated to Version 2.0 on December 4, 2012. The app is available in 43 languages and is optimized for iPhone 5. The current version has 851 ratings at time of writing, with an average of four out of five stars. Feedback comments are positive.