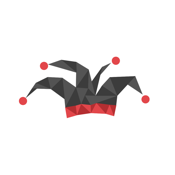 Chances are if you’ve been on the planet for any length of time you’ve played a game of solitaire or two. Solitaire One is a classic solitaire game that keeps it simple. There are no extra bells and whistles in this one – it’s just a simple game of solitaire. If you’re looking for a little time waster that you already know how to play then this may be just the app for you. This is a free app and it’s compatible with the iPhone, iPad, and iPod Touch.

The rules of solitaire haven’t changed much over the years so it’s tempting to think if you’ve seen one solitaire game you’ve seen them all, but that isn’t necessarily the case. Solitaire is a game of strategy that requires you to have your wits about you all the time. Solitaire One pretty much keeps to the standard mold of every other solitaire game, but it does work seamlessly. The app never froze on me once, and there were no visible glitches that I could see.

The only real flaw I found in this one was the bare bones nature of it. There’s nothing to distinguish this one from any other game of solitaire. The graphics aren’t particularly good – there’s just the basic outline of a card with the card number and suite, a plain white background, a timer, and a play button. That’s about it. This app will only require 1.1 MB of free space on your iOS device. 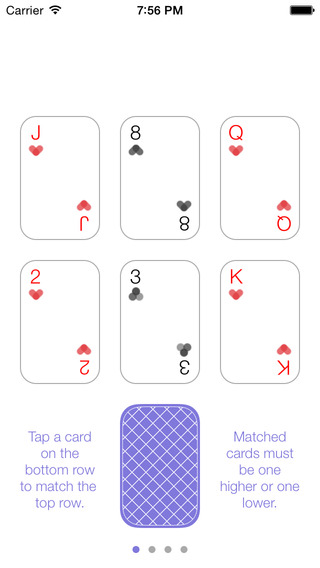 When you open the app you’ll be greeted by the iOS game center logo if you’ve previously signed up for it, so you can keep track of your progress there as well if you like. Other than that there aren’t any twists to this game. You’ll notice three stacks of cards on the top, and three stacks of cards on the bottom. Tap on the play button to get started and the timer on the lift will begin to tick. Tapping the play button will also deal your cards. All you have to do is match cards in incremental order with those on the top to remove cards from the bottom decks. For example, if you have a 2 on the bottom and a three on the top you can move the bottom card to the top. You repeat this process until you’ve removed all the cards from the bottom deck, or you run out of potential moves.

This is without a doubt one of the simpler versions of solitaire you’ll come across but it does have some nice little features. If you tap on the settings icon in the bottom right corner you’ll be able to view various stats about your gameplay including: you’re high score, you’re low score, you’re average score, games you’ve won, games you’ve lost, as well as the length of your games. There’s a lot of information here. 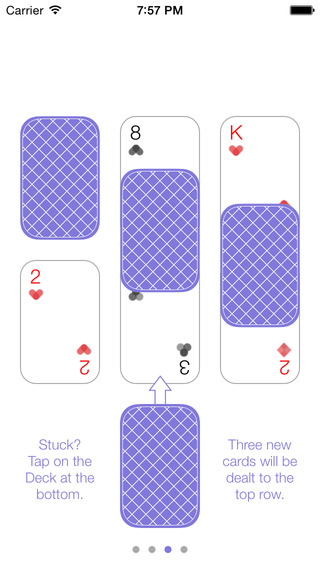 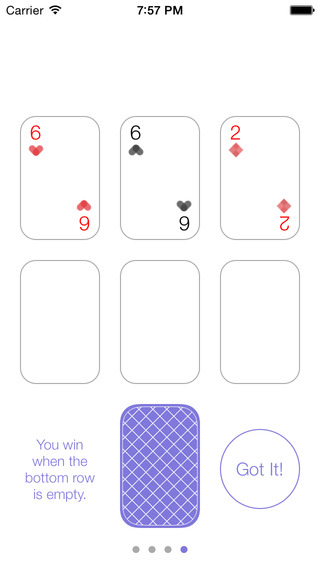 If you like to play solitaire you’ll probably be fairly satisfied with Solitaire One. It’s a very simple version of a classic game, but it works very well.