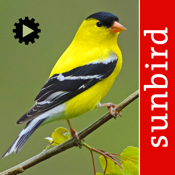 It doesn't matter if bird watching is a serious hobby of yours or you just take part in it casually; having a reference tool handy can certainly help you with identification. The Bird Song Id USA Automatic Recognition and Reference app can be used on your iPod touch, iPad, and iPhone and gives users the ability to identify the birds found in the Eastern U.S. simply by their calls and songs. You can leave all the work to the app as this identification is done automatically for you.

The best iPhone and iPad apps for bird watching

Instead of making guesses about the bird that you are seeing and hearing you can refer to the Bird Song Id USA Automatic Recognition and Reference app which allows you to record the bird singing and the app will automatically detect what it is. The app can be used on birds found in the Eastern United States and contains a library of 156 different calls and songs. You can even save bird song recordings that you have made in order to keep a diary of all the birds you've spotted and heard.

This reference based app was last updated almost six months ago when the automatic recognition went through a variety of improvements. The app scores fairly high with users who have given it four out of five stars. Customers have called it easy to use, an excellent offering, but it could do with more content and data in order to feel more complete. 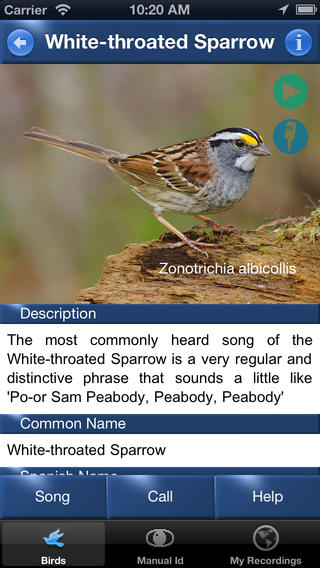 The Bird Song Id USA Automatic Recognition and Reference app is meant to perform a pretty basic but helpful task and that's to identify the bird you are hearing. With that said, users shouldn't expect many added tools or features. Developers have also recommended you practice getting audio a number of times as you need to figure out exactly how good of the quality your sound recording needs to be in order to have the bird identified. The best tip is to record the bird song when it is quiet around you so that the app is able to capture just the bird call.

What's great is that you won't need any sort of Internet connection to use this offering. You can also listen to audio samples in order to help you differentiate between birds. The app is able to record 30 seconds worth of the song/call and it is recommended you use up all 30 seconds. 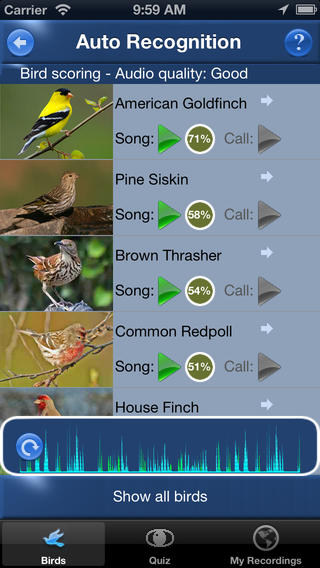 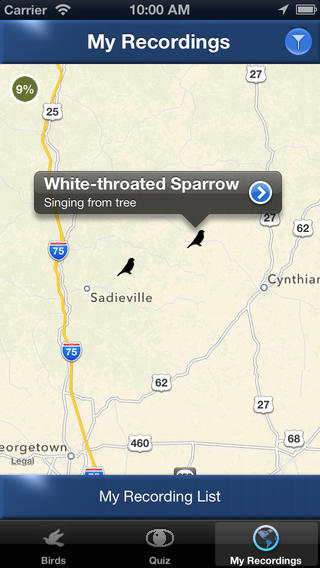 The Bird Song Id USA Automatic Recognition and Reference app for your iPod touch, iPad, and iPhone may not be the complete tool for bird watching enthusiasts but it can certainly help. It would be nice to see this one be a bit more user-friendly.