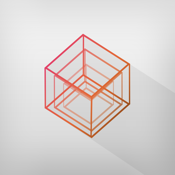 Most of us love to play games and, when it comes to simple yet addictive games, you can usually find what you’re looking for in the App Store. It doesn’t matter whether you prefer side scrolling games, endless runners, or a good old fashion shoot ‘em up – there is bound to be a game for you if you look hard enough. Infinity fits firmly in the simple to play but highly addictive category. This is a free app and it’s compatible with iPhone, iPad, and iPod Touch.

There are many games that are designed to appeal to as many people as possible and end up pleasing no one in the end. It’s the games that clearly define a niche that have the most success. Infinity is this type of game. If you like a fast pace, rapid fire shooting and a whole lot of fun, then Infinity won’t disappoint. From the second you hit play on this one you need to have your wits about you or your game will be over in a matter of seconds.

I didn’t find much not to like about this one. The graphics are a little simplistic, but that’s part of its charm. The game seems to be set in deep space and the eerie music does match what you would associate with such a setting so it works pretty well. On occasion I did run into the app shutting down when I attempted to open it, but it worked on the second try every time so this wasn’t too much of an inconvenience. This app will require 15.4 MB of available space on your iOS device. 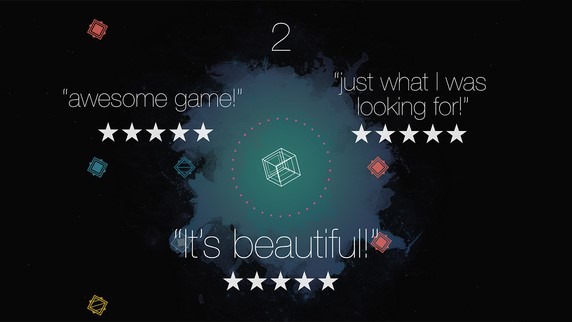 When you open the app you’ll notice a greeting from the Game Center. Including Infinity as a Game Center app gives it a social interaction aspect which I thought was a big plus. Through game center you can compare your own high score against the high scores of your friends and other online users, as well as interacting with them. It’s always nice to be able to share your love of a game with others.

On the main screen of the app you’ll see your current score displayed, your high score, a play button, and a menu.  The first three are self-explanatory, but the menu does take you into a new screen with a few more options. Within the menu you can find game play instructions, you can access the high score leaderboard in the Game Center, and you can also access the developers twitter account if you’d like to follow him to keep abreast of any changes to the game or be made aware of any new games he might be releasing in the near future.

The actual game play is very simple. You are defending the square in the middle from the encroachment of fast approaching blocks from all directions. Around your block is a dotted circle, if the blocks come in contact with this circle your game is over. To destroy the attacking blocks you simply tap on them as they approach to release your fire. As simple as it sounds it’s actually quite challenging and it gets harder because the approaching blocks speed up the longer you last. I found myself addicted to this one the first time I played it. 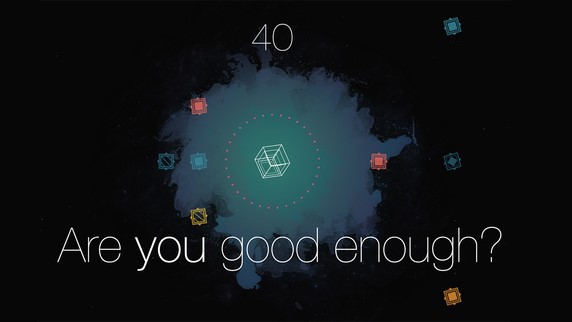 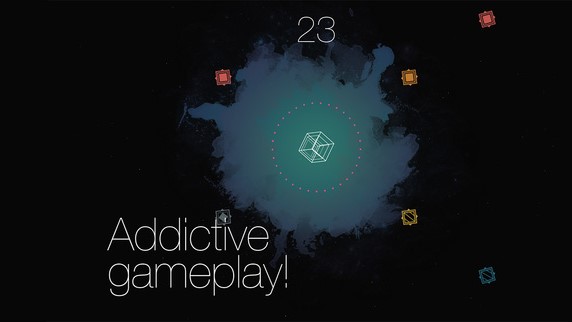 Infinity is a fun little game. It’s easy to play, but it’s not easy to master. They key to a great App Store game is to find a niche and Infinity clearly fits into the fast paced shooting category of games. This one’s definitely worth downloading.