How many times in a day do we ask ourselves how often we do something? Do you ever wish you could easily keep track of how many coffees you drink in a week or how may workouts you’ve had in the same week? Well that’s the idea behind this app for organizing things.

This organization app was designed to give you an easy way to keep track of your daily activities and have a little fun in the process. It’s a great idea and the app would be easy to use if it worked right – it just doesn’t always do what it’s supposed to do.

This is a free app and it’s compatible with the iPhone, iPad, and the iPod Touch. Keep reading our Trivit app review to learn more about this good organization app for iPhone.

The great thing about apps is that there seems to be one for just about anything we can think of. In many cases we come across an app that we find we can’t live without. Yet, before we came across it we didn’t even know we had any need for such a thing.

Trivit was definitely designed with this type of mentality in mind. There are all kinds of trivial little things you might think of as things that would be good to keep track of, but they’re not normally things you would lose any sleep over if you didn’t.

The idea behind Trivit is that once you start tracking the trivial little details off your life you’ll become obsessed with doing so.

Trivit is a great idea and if it worked as advertised it probably would be quite an addictive little app – the problem is that it doesn’t. I found this app would continuously freeze on me and it just didn’t want me to save any of the changes I made.

I couldn’t save any of my own Trivit names – every time I tried the app would simply freeze up and if I tried restarting the app the Trivit name would be restored to a name that the app had created by default. This was extremely frustrating!

I even tried deleting the app and reloading it without success. I finally got a hold of the developer and found out it was because I was using an eternal keyboard with my iPad – it simply wasn’t designed to handle that. 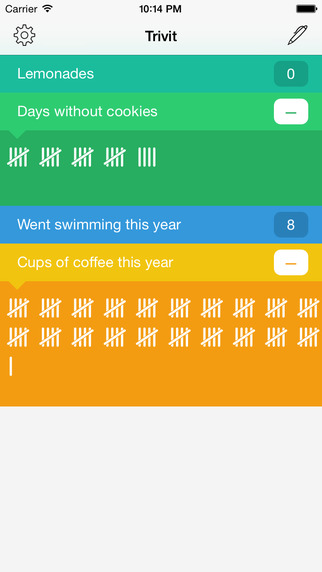 The concept of this app really is a good one. I was actually pretty interested when I first opened it to get started. The app starts with an introductory tutorial which is always helpful but you can skip it if you like. Once you enter the app you’ll see some basic Trivit’s that the app has included for you.

The best habit building apps for the iPhone and iPad-2021

A Trivit is an item you wish to track in your daily life such as how many coffees you drink. You have the option to delete any Trivit the app has added by swiping left on the Trivit and then tapping on delete.

If you want to add a new Trivit you’ll notice a pen in the top right corner, simply tap on the pen and a new Trivit will be added for you. All of this works fine, it’s when you try to change the name of a Trivit you run into problems.

It seems simple enough, you simply tap on the Trivit and type in the new name, but any time I did this it simply wouldn’t save and I couldn’t do anything else the app just froze. If I closed the app and reloaded it none of my changes were saved.

If you want to use the Trivit suggestions that the app creates then the app works fine. To add a tally to your Trivit you simply tap on it and then tap in the tally board that appears beneath the Trivit and your count will change accordingly.

There doesn’t seem to be a limit to the amount of Trivits you can add. Unfortunately, without the ability to modify Trivits to match the details of your own life I just didn’t find this app all that useful.

As it turns out I could get it to work if I didn’t use my external keyboard, but it shouldn’t matter which type of keyboard I use. 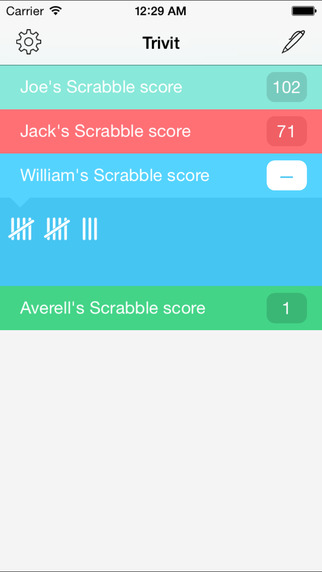 Trivit has the potential to be a great app if they can work out the bugs. Unfortunately in its current form it’s just not that useful. Perhaps if the developer can get the app working as advertised it will be worth the download, but it isn’t at this point in time.