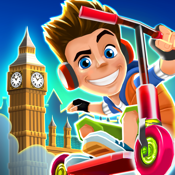 Skyline Skaters app review: skating the rooftops of the world

With the popularity of the endless runner category of the App Store it seems like there’s always something new to check out. Let’s face it: pretty much everything’s been tried in these type of games so it’s not often that one comes along that’s fresh and exciting. Skyline Skaters is an endless runner app that does bring something new to the category. If you’ve played Subway Surfer this one will have a familiar look and feel to it, but it has enough unique features to make it worth downloading. This is a free app and it’s compatible with the iPhone, iPad, and iPod touch.

If you’re a fan of endless runner games you’ll enjoy Skyline Skater. This is a fast-paced game that requires you to have your wits about you at all times. It has all the standard features you’ve come to expect in these types of games. The object is to survive as long as you can while collecting as many coins as possible and avoiding the rooftop police that are chasing you.  It’s a lot of fun and will keep you entertained; the only problem is trying to put it down!

There’s a lot to like about this one. The graphics are excellent and the action is non-stop. It does borrow a lot of features from Subway Surfer but that’s not necessarily a problem; if it ain’t broke, don’t fix it, right? Unlike Subway Surfer this one’s a sidescroller so it gives the game a slightly different flavor. The only real problem I had with this one was that it seemed to hang up on occasion as it just freezes in the middle of play for a second or two. It’s definitely a little frustrating when you’re in the middle of an intense game. This app will require 67.2 MB of free space on your iOS device. 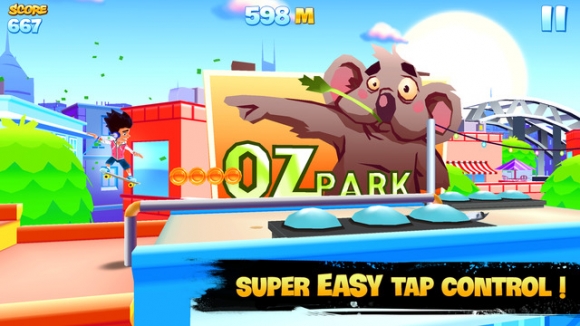 The gameplay will be very familiar to anyone who’s played this type of game. In this one you control a skateboarder as he makes his way across the rooftops of a city. To jump over obstacles you simply tap on the screen and if you double tap your character will jump higher and perform little tricks. This extra boost can really help when you’re jumping over some of the larger gaps between rooftops.

The idea is to collect as many coins as you go and improve upon your best distance so you’ll get bonuses when you collect every coin available in a chain. You’ll also notice letters that you can collect as you go through the game. These letters spell out a word and when you complete the word you get bonus packs. There are in-app purchases available if you want to purchase upgrades sooner but you can also get these as you progress through the game. This definitely is a fun game with lots of action and you can share your high scores with your friends via Facebook or Twitter. 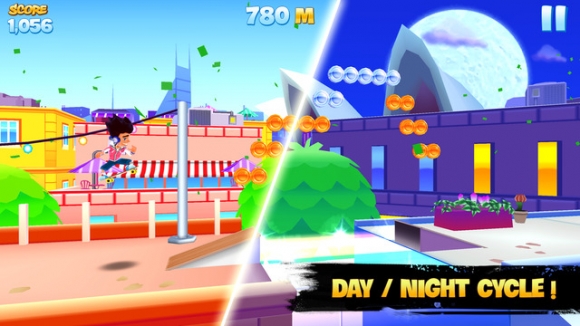 Skyline Skater is another great entry in the endless runner category of games. It has a lot of the features made popular in games like Subway Surfer but it’s got enough original features to stand on its own as well. This one’s definitely worth checking out.