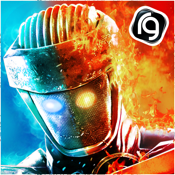 A few years ago a movie came out featuring futuristic fighting robots called Real Steel. The movie was set in the near future where human boxers have been replaced by battling robots.

Real Steel app for iPhone is an App Store video game based on this movie. The iPhone robot game features excellent graphics and strong gameplay not normally associated with free games in the App Store.

This is a free iPad fighting games app and it’s also compatible with the iPhone and iPod touch. Check out our Real Steel champions app review to see if it's one of the best robot games for iPhone.

There are other fighting games apps available on the iOS platforms, but not many that feature battling robots and it’s based upon a popular movie to boot.

This app features killer graphics and excellent gameplay; it really responds well to your commands. As an added bonus it does a good job of developing the background story as you go enabling you to enjoy the game even if you’ve never seen the movie.

One thing I didn’t like about this game was the extremely long load times. The initial boot up takes quite a while and I actually began to wonder if it was working at all. Eventually it does load but you do have to be patient. You’ll also experience a little lag when trying to select different items in the store as well.

Another problem with this one is that it does have a tendency to crash on occasion, usually in between games. It seems to hang up when it’s trying to load the next game. If you exit the app and reboot it appears to fix the problem but it is a glitch that the developer needs to address. This app will require 104 MB of free space on your iOS device. 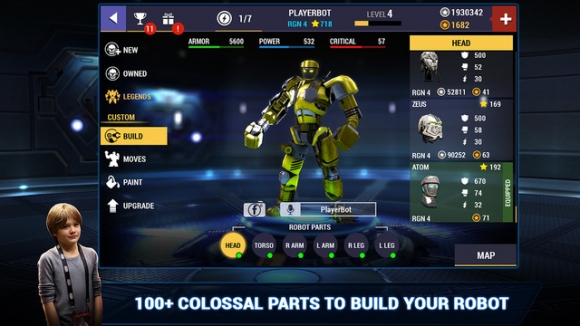 When you first start the game you’ll be prompted to build your robot. Your guide through this process is a young boy, one of the stars of the original movie.

You’ll have to start with some basic armor and features but as you win more fights you’ll be able to buy better items. You can also obtain upgrades through in-app purchases. After each successful bout you’ll be able to return to the store to build a better robot.

This app also has a lot of extras, you can customize your game controls or you can use an actual physical controller if you have one. There’s Game Center Integration and you can share your scores on Facebook as well. It’s got all of the features you would expect of a higher end game in the App Store.

Controlling your robot during matches is straightforward. When your match begins you’ll notice a virtual gamepad on the left-hand side of the screen for moving your robot and on the right side you’ll find different buttons you can tap to perform various fighting moves. The controls react well to your movements making for quit an exciting fight simulation. 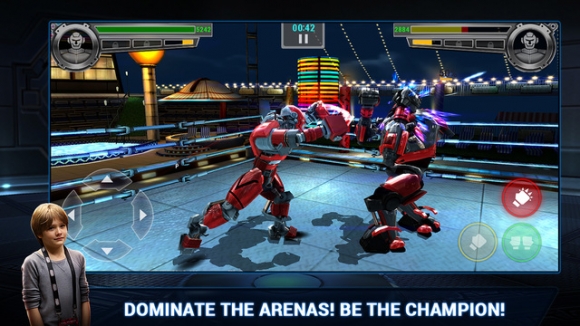 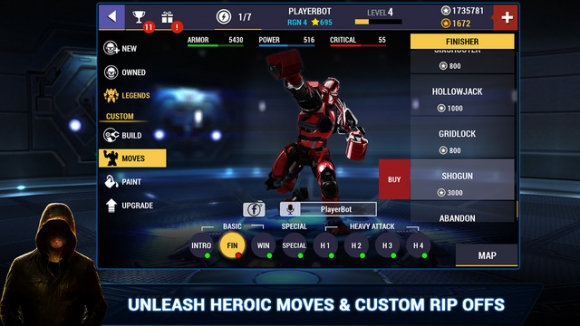 If you enjoyed the movie Real Steel or even if you’re just a big fan of robots you’ll find Real Steel Champions a lot of fun. This game features excellent graphics and game play which makes for a great experience. The game does freeze on occasion and the loading times can be a little long but overall it’s a pretty good effort for a free game.