Developers are always looking for the next great app idea. Usually the most successful ones are games but photo editing apps are quite popular as well.

Normally these types of apps will let you change your photos to grayscale, add some text, and some other minor adjustments, but they don’t really change the actual content of the picture.

Slim and Skinny photo editing app that will let you actually alter the appearance of the faces and bodies of people in your pictures. This is a free photo editor for iPhone, iPad and iPod touch.

Let's take a closer look at what this iPhone app for editing photos has to offer in our Slim and Skinny app review.

Slim & Skinny is a photo editing app that’s a little different from apps in this category. With this app you can actually alter the appearance of people in the pictures not just the backgrounds.

It’s refreshing to find an app that isn’t just like every other photo editing app you’ve ever come across. The app gives you the tools to change both facial appearance and a person’s body as well.

There are a couple of fairly serious issues with this app that are hard to ignore. First of all there are ads throughout the app including full-paged ones that you can’t bypass for at least five seconds. The first time I opened the app I was bombarded with a pop-up ad right away and this was definitely a little annoying.

The other problem with this app is that the changes you make to the pictures don’t always look realistic; they often end up looking like something in a funhouse mirror. This app will require 28.6 MB of free space on your iOS device. 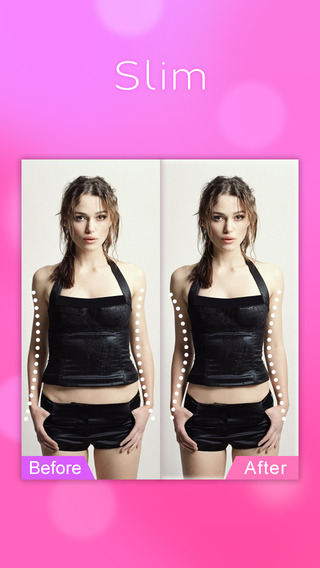 When you open the app you’ll probably have a hard time filtering out what’s an ad and what’s actually part of the app.

There’s a large ad for another app from the same developer displayed prominently at the top of the main window, followed by a series of smaller ads for different apps, and there’s also a banner ad at the bottom of the app.

Within the photo editing section of the app you can either select a picture from your existing album or take a new picture to use. Once you’ve made your selection you’ll notice a tool bar below your picture with five different editing options.

You can make the face thinner, the head thinner, the chin thinner, the body slimmer, or you can opt to change features manually. The controls are pretty simple as all you have to do is tap on a sliding bar to adjust the features.

There are a lot of social media sharing options here but once you choose which method you want to use you’ll have to put up with another full-page ad before you can proceed. 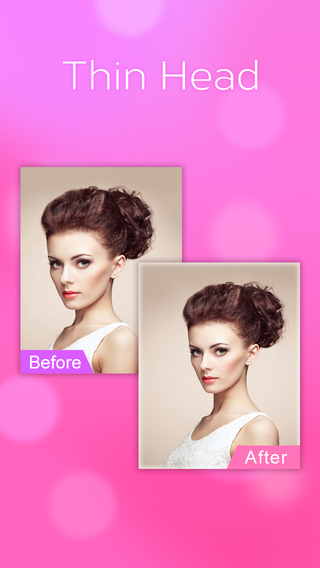 Slim & Skinny is an interesting app that allows you to actually modify the physical features of people featured in your pictures. If it wasn’t full of ads it might be worth downloading but unfortunately the pervasive ads are hard to get past.