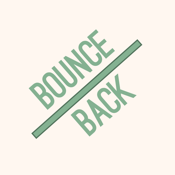 If you’ve owned an iOS device for any length of time you’re probably familiar with game apps that claim to be the next big thing. Occasionally these claims have some merit, but most of the time these apps are just another flash in the pan. Let’s face it: the games category of the App Store may be the most competitive category for an app to compete in and to stand out from the crowd you have to provide something just a little bit special.  Bounceback - Endless Game is an interesting effort but it just doesn’t offer enough to make it a stand-out effort in the App Store. This is a free app and it’s compatible with the iPhone, iPad, and iPod touch.

Probably one of the most frustrating things for owners of iOS devices is trying to wade through the muck to find something that’s actually worthwhile.  This is especially true in the games categories because there’s just so much choice it’s hard to decipher what constitutes a good app and what should be discarded without much thought. Unfortunately Bounceback - Endless Game falls squarely into the second category. This app just doesn’t have enough going for it.

The graphics in the Bounceback - Endless Game app are very basic, but that doesn’t necessarily mean too much. There are tons of games available for download that included highly addictive gameplay and yet still include the most basic graphics. For a game to succeed it has to have intuitive gameplay more than anything else and that’s where Bounceback - Endless Game fails: this game just doesn’t play as you think it should. When you try to control this game in order to move forward it just doesn’t respond and how far you can travel seems to be more about the luck of the bounce than anything else. This app will require 9.5 MB of available space on your iOS device. 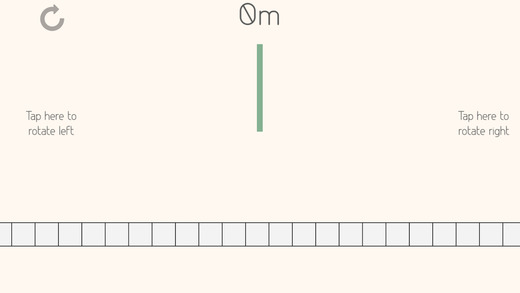 The object of this game is very simple: you control a stick and the aim is to move it as far to the right as you can manage. To move the stick you simply tap on the left or right side of the screen to change its momentum. If you tap on the left it will rotate in that direction and if you tap on the right it will spin the other way. The problem is trying to control the spin is a bit of a crap shoot. If you tap faster the stick will speed up but trying to time your spins correctly to control the stick's contact with the ground is next to impossible. There’s nothing wrong with a challenging game, but most of us will lose interest if we don’t feel we have any real control at all. Unfortunately Bounceback - Endless Game does not leave you with the feeling that you’re in control.

This game does have Game Center integration which is always positive because it’s nice to know how you compare to others who are playing the game. Other than that there isn’t a lot more to this app; it does provide you with a link to leave feedback with the developers and to rate the app, but that’s about it. 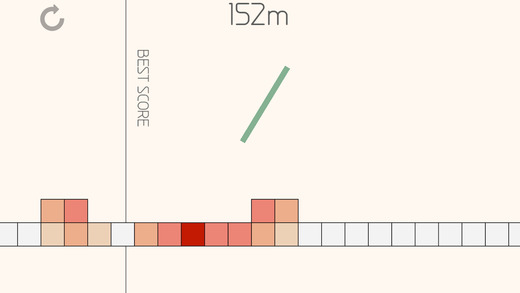 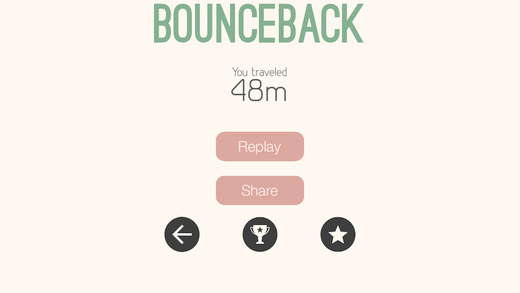 Bounceback - Endless Game is a challenging game which is usually a good thing, but this one’s probably just a little too challenging with very little reward. Most of us who like to play game apps enjoy a challenge but we want to know that there is a possibility of mastering the game eventually. With this game you’re likely to walk away a little frustrated.