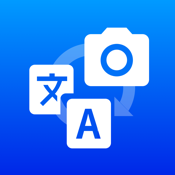 Translate Photo is a scanning tool that allows you to extract recognizable texts embedded in an image. It also works as a portable translator that supports more than 90 languages. It offers basic photo editing options including crop, rotate, color schemes, brightness, and contrast. Developed by Volgan Shpitz, this app is compatible with iPhone, iPad, and iPod touch.

Image Scanner and Translator in One App

Whether you are a language student or a casual traveler, it is always important to have a handy document scanner with a built-in translation tool. The good news is that you can use your iOS device for this purpose. All you need to do is to download Translate Photo, a combo image scanner and translator app.

The best translator apps for iPhone 2021

You can use Translate Photo to scan paper documents such as book pages, instructional manuals, product labels, newspaper and magazine articles, and restaurant menus. It can also take photos of street signs, airport directions, and more.

This app can extract any recognizable character embedded in the image. It then converts the image into text format so you can edit it later.

However, Translate Photo is not just a document scanner. It is also a powerful translator that supports more than 90 international languages. It is capable of translating the texts that you have extracted from a scanned document.

Translate Photo is available as a free app on the App Store. It automatically integrates with the device camera so you can take photos directly from the app’s interface.

Like most text scanners for mobile, this app requires you to take good snapshots of paper documents. Make sure that the photo is free from any distortion or blurring to allow accurate text conversion. You can then translate the text so you can read it in your own language. 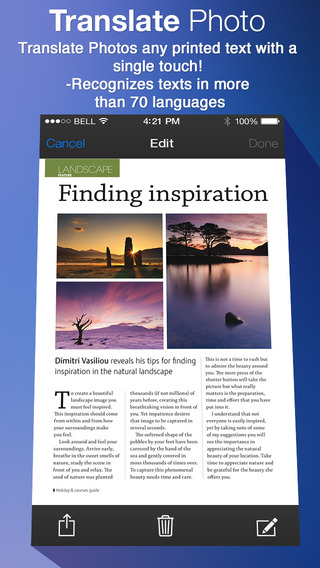 Translate Photo uses a powerful optical character recognition engine to detect text from captured photos. It extracts recognizable characters and converts them into searchable and editable text format. It supports almost all types of paper documents.

You can also use this app as a translation tool. It allows you to translate converted text to more than 90 output languages. It uses a cloud based translation engine so you need to connect to the internet before you can begin the translation process.

And lastly, the app supports several sharing options. It allows you to share translated texts via Dropbox, Google Drive, email, and Facebook. 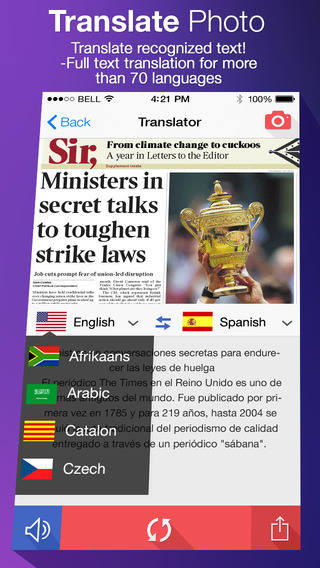 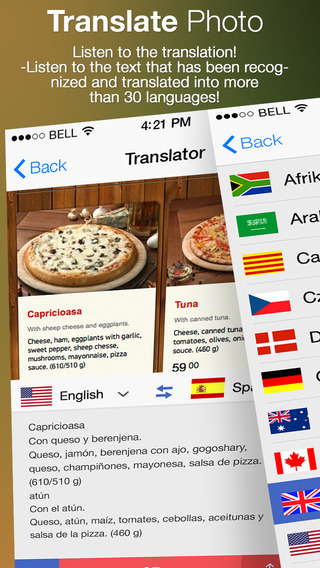 Translate Photo is a useful image scanner and text translator. It allows you to scan images so you can extract embedded texts. It offers a handy translator that supports more than 90 major languages. If you are planning to travel to another country or you simply want to learn another language, then this is a good app for you.