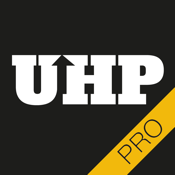 Uhp Alarm Clock Pro app review: a fully functioning alarm clock that will not let you sleep in

Uhp Alarm Clock Pro by BeauxApps, LLC may be the smartest alarm clock app ever created for the iOS operating system. Most alarm clock apps allow you to set the time you want an alarm to go off, they have a snooze feature, and they sometimes allow you to wake up to music you’ve selected from your iTunes collection – that’s it. Uhp Alarm Clock Pro features all the standard features that typical alarm clock apps have and a whole lot more. If you can sleep through this alarm clock there probably isn’t anything that will wake you up on a consistent basis. This app is available for purchase from the App Store at a cost of $0.99 and it’s compatible with the iPhone, iPad, and iPod Touch.

An Alarm Clock to Wake You Up Every Time

If there’s one kind of app that may be a little bit too abundant it’s alarm clock apps. It seems like there’s a new alarm clock app being released just about every other day. It’s hard to differentiate your offering in such a crowded category but the developer of Uhp Alarm Clock Pro has managed to accomplish it. The unique set of features in this app actually redefines what an alarm clock can be. If you’re one of those people that just don’t seem to get out of bed no matter what you try, this app may very well be the answer you’ve been looking for.

If there’s one aspect where this app has room for improvement it’s the lack of an actual proper clock face. Once you’ve set your alarm it will appear in the main menu, but there is no clock in the traditional sense of most alarms. The current time is present in a small display at the top of the screen – this isn’t the most user friendly design if you like to check the time in the middle of the night. This app will require 36.2 MB of available space on your iOS device.

The main screen of Uhp Alarm Clock Pro has a very spartan appearance – there’s a tab to add a new alarm and a settings menu icon in the top right corner. The settings menu has all the standard features you’d expect to find including links to tutorials, terms of use, an about section, and a feedback section. You can also modify the accuracy of the path tracking feature from within this section.

To create an alarm from the main screen you simply tap on the new alarm tab. Setting your alarm time is straightforward, you just swipe through the numbers to select your desired time and indicate if it’s AM or PM. You’ll notice several different features at the top of the alarm window including: a feature to set the intervals between snooze times and how many are allowed, an option to set the music you wake up to, and the path tracker feature. The path tracker feature is really what sets this app apart. With this function you can set the alarm to only stop once you’ve walked a pre-set path such as the path to your bathroom or your coffee maker. It does work without the aid of GPS, so it will work even if this feature doesn’t work on your device. The other interesting feature in this app is the ability to set up postings to Facebook if you don’t wake up when you’re supposed to – the idea is to apply a little social pressure to get you moving. 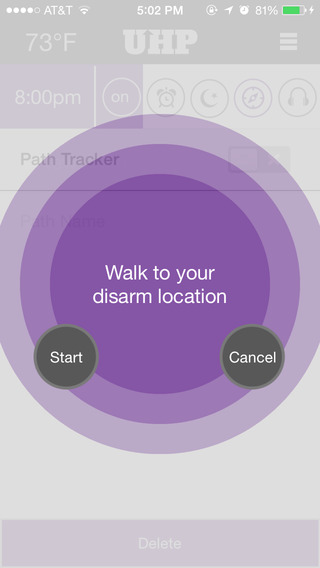 If you have trouble convincing yourself to get up in the morning Uhp Alarm Clock Pro may be the solution to your problems. This app includes an innovative new path tracking feature that won’t let the alarm stop until you’ve walked a pre-set path. There’s also a social networking link up that will post messages about your failure to get out of bed to Facebook if you don’t get up in time. This alarm clock is definitely not like most other alarm clock apps in the App Store.