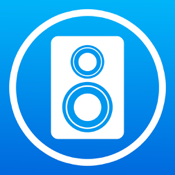 Multi Track Song Recorder by Derrick Walker is a four track studio recording app for the iPad that boasts of a simple user interface and set of controls so that anyone can make great music.

This app’s been a popular download from the App Store for many years, which is quite a feat when you consider the iPad came out the same year this app did!

That’s a lot of longevity for an iPhone app for studio recording in an environment that is often quite fickle – we’re always looking for the next great app.

There’s a reason this app has been around so long and that’s simply because it does its job so well. This is a free recording studio app and it’s compatible with the iPhone, iPad, and iPod Touch.

Keep reading our Multi Track song recorder app review to see if this is one of thtop multitrack record apps that you have ever used.

Sound recording apps are fairly common in the App Store. Some of these are more focused on instruments and include complicated mixing equipment for creating drum or keyboard synthesized music and they’re not exactly user friendly — unless you’re a professional musician.

If you just want to have a little fun with sound recording, or if you’re just getting your music career off the ground, then you probably don’t want to take the time to figure out a complicated set of tools you may not have a lot of use for.

The great thing about Multi Track Song Recorder is that it keeps things simple and that has been its key to success over the years.

You will have to put up with some ads in the free version of the app, although it’s in the form of banner ads that are nothing more than a minor distraction. Perhaps the most disappointing aspect of this otherwise fantastic little app is that the developer hasn’t included any sort of introduction, link to a YouTube video, or a set of instructions.

The app is simple to use and doesn’t have much of a learning curve, but it would still benefit the user if there was some kind of quick guide to help you get going. This app will require 8.7 MB of available space on your iOS device. 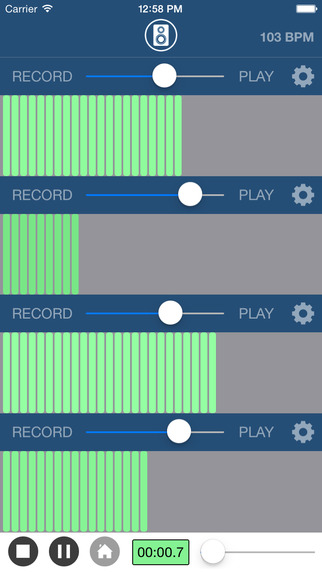 When you open the app you’ll see a nice simple interface with the four different tracks. Each track has a record button and a play button – to start recording on any track just tap on its record button and start singing or playing your instrument.

You can make the tracks as long as you like. If you want to hear what the recording button sounds like when you’re done just tap on its play button.

Once you’re satisfied you can then do the same with the next track and so on. For example, one track might be for vocals, another for guitar, a third for drums, and the last one for keyboard.

When you put it all together you’ll have a professional sounding recording that you created by yourself in no time at all. Once you’ve completed all four tracks and you’re satisfied with the output you can see what it sounds like all together by tapping on the master play button in the bottom left corner.

This will play all four tracks at the same time. If one track is shorter than the others, you may want to set it to loop which can be done with the settings icon located in the right corner of each track. It doesn’t get much easier.

When you’re satisfied with the overall production quality of your piece you can tap on the home button at the bottom of the screen for saving and sharing options. You can save the song to your device, email it to a friend, share it through Dropbox, or through iTunes file sharing.

You’ll also find a handy Metronome on the home screen if you want to work on your timing. This really is a pretty complete recording app that anyone can learn how to use in a short period of time. 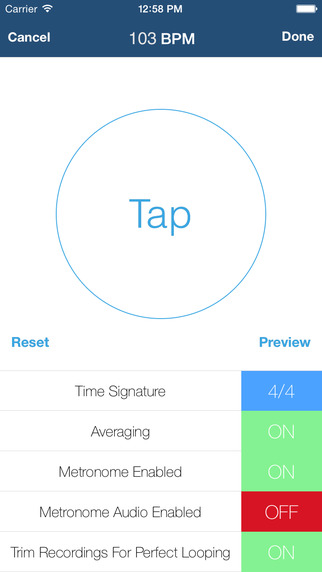 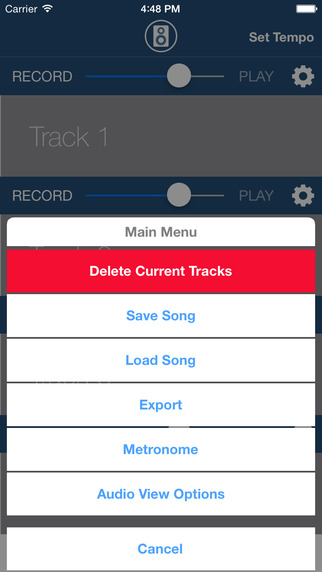 Multi Track Song Recorder is one of the simplest and most versatile song recording apps you’ll find in the App Store. With the ability to record and merge up to four different tracks you can create songs with professional sounding quality. This app’s a must have for any budding musician.