ALIENGINE app review: get ready to battle in space

Are you the type that appreciates a good arcade game? If so, you'll want to check out the ALIENGINE app for your iPod touch, iPad, and iPhone which is filled with fast-paced arcade space action. This game is a traditional space shooter game that offers endless waves of enemies. Players are loving all kinds of aspects of this game from the graphics, to the game controls, to the sound effects. This game seems to have it all. Players can even test their skills against challenges from all over the world.

One thing that becomes apparent pretty much right away is just how addictive the ALIENGINE app is. The rules are quick and easy to pick up on and because it features one-touch controls, it’s got that user-friendliness going for it as well. The game takes place in space where the Galactic Federation has narrowed in on a few districts that are highly dangerous and hostile for its pilots to practice their flying skills in. You never know what kind of obstacles will be coming your way whether it's other alien objects, asteroids, or something more sinister - you need to be on high alert at all times. As you can imagine this game is a real test of your reflexes.

The ALIENGINE game has just gone through some rather extensive updates such as new creatures and spaceships, three new game levels, new achievements, a daily log-in rewards bonus, a tutorial that is extremely helpful, overall bug fixes, and minor improvements. This one requires iOS 7.1 or higher to use. It doesn't yet have a customer rating or reviews. There are a number of additional features in the ALIENGINE app that are worth mentioning, as they help to make the game as fun as it is. Thanks to the simple controls you'll be able to forge an attack and even dodge obstacles at the same time. There are a number of different spaceships to try and you will be able to challenge other players to see who has the best survival time. The graphics are what one expects from an arcade-style game with plenty of bright and lively colors, and sound effects and music that are equally as fun.

You’ll want to be sure that the overall fun look of ALIENGINE game doesn’t fool you because this one is actually quite challenging and takes some time to master. 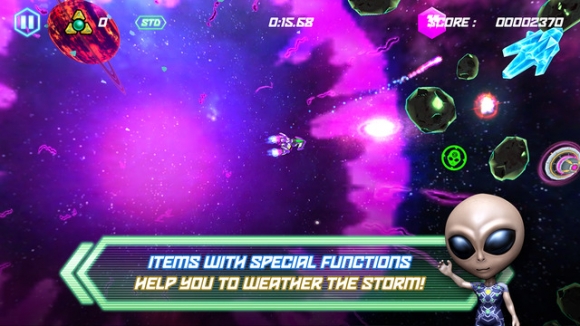 The ALIENGINE app for your iPod touch, iPad, and iPhone is a fun casual style game that is quick and easy to pick up on and provides players with hours of fun. You won't be disappointed after downloading this one.