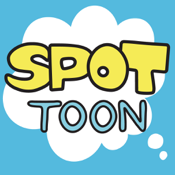 The best magazine apps for the iPhone

The SPOTTOON app is no longer in iTunes but you can find an alternative cartoon app on our iPhone list. You can also find all the top iPhone apps on our applists. We have also reviewed these cartoon apps or check out our iPhone app reviews:-

SPOTTOON is a full featured comic and manga reader app with tons of volumes to choose from across several different genres. If you’re a fan of the manga style of comic book you’re likely going to love this app. SPOTTOON brings together all of the most popular manga comics from right across the web and incorporates them in one simple reader. You’ll be able to catch up on all your favorites with this app without having to search all over for them. There’s something to be said for the convenience of having all the best manga comics in one app. This is a free app and it’s compatible with the iPhone, iPad, and iPod Touch.

Get Your Manga Fix

There is no shortage of manga comic book readers in the App Store, so there’s no shortage of competition for SPOTTOON. Where this app does excel over its competitors is in its ease of use and the amount of free content that’s included with this app. There are no manga reader apps that offer completely free content, but this one comes close. It’s also got a great user interface which isn’t always the case with comic book readers – other reader apps are often disorganized and difficult to use. SPOTTOON definitely qualifies as one of the best Manga comic book readers you’ll find in the App Store.

This is an app loaded with options and they make it easy for you to access the content that appeals to you easily and quickly. There are no ads in this app to interfere with your enjoyment of the comics, but as mentioned above all of the content is not free. In general, the app offers the first four or five episodes free and after that each additional episode is $0.99 – not a bad deal. Most other manga readers offer no more than one or two episodes free so this is a pretty good deal. The SPOTTOON app will require 1.8 MB of available space on your iOS device. 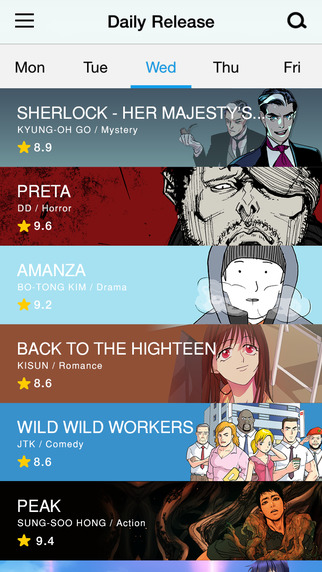 The main interface of the SPOTTOON app is divided into five different categories: New Releases, Genres, Popular in Your Region, Popular by Genres, and Recently Viewed. This set up makes it easy to quickly access the content you want with one simple tap. You can also access these different categories by tapping on the settings menu in the top left corner if you prefer. In the settings menu you’ll also find an activity log that you can use to share the comics you’ve read with your Facebook friends, you can also check on your payment history in this section as well.

When you find a comic that interests you all you have to do is tap on it to pull up an episode guide – most comics have nine episodes with the first five available for free. When you open a comic you simply swipe up on the screen to read the entire page, and tap on the right pointing arrow to go to the next page when you’re ready. In each comic you’ll also find a sharing feature that you can use to share the episode with your friends and family on Facebook or Twitter. 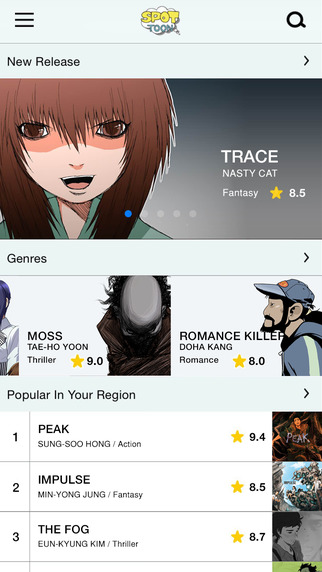 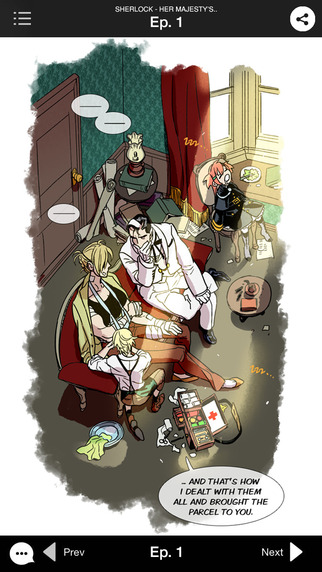 SPOTTOON is one of the better Manga comic book readers you’ll find in the App Store. This app gives you lots of free content, it’s easy to use, and it includes all of the most popular titles. If you’re a manga comic fan this app is a must have.