Pop Dash – Music Runner is not just your average endless runner game. This game by Maximum Play combines the endless runner style of game with a great musical soundtrack and game aspects that will remind you of Guitar Hero. As you make your way through the glitzy streets you’ll be accompanied by the tracks of all your favorite pop artists such as: Nicki Minaj, Meghan Trainor, and Lindsay Sterling – in fact, you can even choose Lindsay Sterling as your character in the game. You’ll have to run, jump over, and dodge obstacles as you go. There’s something about playing a game to your favorite music that seems to make things that much more intense. This is a free app and it’s compatible with the iPhone, iPad, and iPod touch.

Run and Groove to Your Favorite Pop Stars

If a game is going to be successful in the endless runner category it has to bring something different to the table – something that hasn’t been done before. The most successful games in this category have been titles such as Temple Run, Subway Surfer, and the Minion based games. The reason for the popularity of these types of games has been their detailed backgrounds and fun little bells and whistles. Each one has similar gameplay, but they have enough unique features to stand on their own. Pop Dash – Music Runner continues the tradition of innovation that you find within these games. The music focused theme of this game makes it something a little special.

I really did enjoy the great soundtrack that accompanies this game – being able to listen to some of your favorite pop music while you run through the streets for some reason just makes it a little more entertaining. There are some ads you’ll have to contend with in this app, but they’re very subtle and only pop up while you’re on the intermission page. The game also features some in-app purchases such as extra coins and alternate costume packs, but these are basically shortcuts you don’t have to use. This game has Game Centre integration as well and you can share your scores with your Facebook friends. One other thing I definitely didn’t like was the tendency for the game to crash if you haven’t touched the screen in a while. This app will require 82.4 MB of available space on your iOS device. 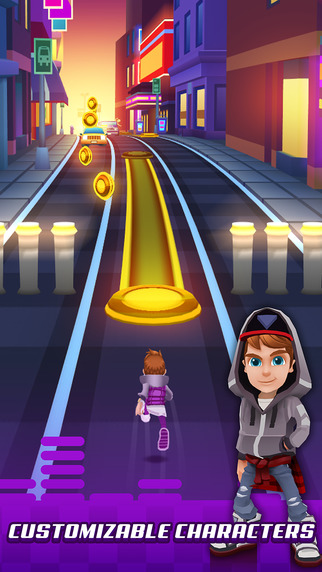 This app’s landing page features a street scene with the various numbered missions dotting the streets landscape. To access a mission and start a game you simply tap on the numbered button to begin. On this main page you can also see the number of coins and diamonds you’ve collected, access special bonus features (you’ll have to watch an ad from their sponsors to collect these), access the leaderboard, connect with your Facebook friends, and access the shopping section for in-app purchases.

If you’ve played any other endless runner game it won’t take you long to get the hang of this one. As you’ll find with any other game in this category you can jump over objects, slide under objects, and swipe left or right to go around them. That’s all pretty much standard stuff, but what makes this one different is the vast array of pop songs that accompany you on your travels. It will have you grooving along as you swipe and dash. The other unique feature of this game is the familiar looking Guitar Hero style tabs that you have to attempt to stay on as you run. If you can do this you’ll gain extra points as you hit the right notes. 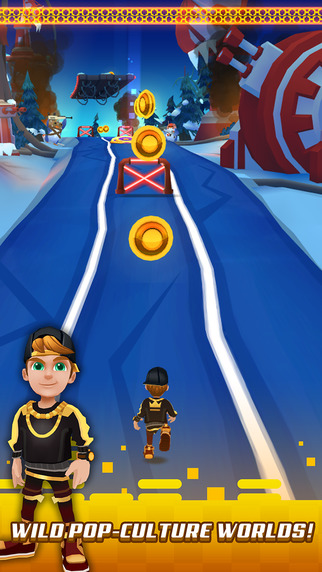 Pop Dash – Music Runner is a fun endless runner style game that includes a great musical soundtrack featuring many of your favorite pop stars. The gameplay is excellent and it’s an interesting twist that you can actually choose a popstar, Lindsay Sterling, as a character within the game. If you’re a fan of the endless runner style of game then you’ll definitely want to check this one out.