Biker Mice from Mars app review: an endless runner or story mode game based on the popular cartoon

As children get older, their taste in cartoons change – it goes from things like Bubble Guppies with simple learning themes, to more complex cartoons that include entertaining storylines such as Biker Mice from Mars. I must admit, until I began this review I wasn’t familiar with Biker Mice from Mars, but apparently it was a popular cartoon from 1993 to 1996 and it’s since been revived in the mid 2000’s.

It’s the story of a race of biker mice that escaped their home planet Mars after it was destroyed by a deadly adversary – certainly an interesting premise. What does this app have to do with all that? This app is a game based around the storyline of the Biker Mice from Mars with two different modes: both a story mode and an endless runner mode which will most definitely appeal to its fans. This is a free app and it’s compatible with the iPhone, iPad, and iPod touch.

Help the Mice save the Earth

As anybody who’s owned and iOS device for any length of time is aware - endless runner games are extremely popular. Some of the more familiar titles include: Temple Run, Subway Surfer, and Catching Fire based on the popular movie series. While these games may differ in their background story, their essential game style is the same. What makes Biker Mice from Mars a little different is that it includes a story mode as well as an endless runner mode. It doesn’t hurt that it’s also based upon a popular cartoon.

While I did enjoy playing this game, I also ran into a couple of problems. Perhaps the biggest issue I had with this game was that it had a tendency to freeze on me on occasion – not a lot of fun when you’re trying to hit your high score. Another issue that I found just about as frustrating was that on occasion I found the touchscreen unresponsive to my commands – which generally resulted in the inevitable crash scenario. You will also have to put up with ads in this game although they are somewhat infrequent and there are in-app purchases too. This app will require hundred and 29 MB of available space on your iOS device. 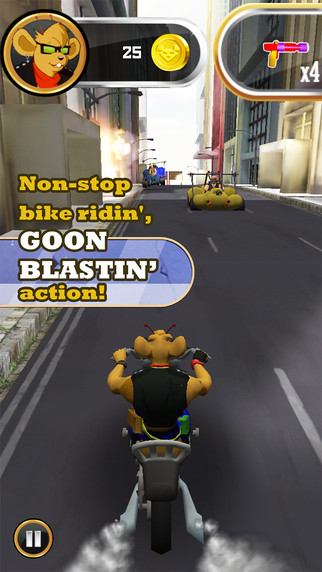 As mentioned above, there are two different gameplay modes available: a story mode, and an endless runner mode. The endless runner mode is very similar to every other endless runner game you've played before – the idea is to keep moving forward while collecting coins, swiping  sideways to move out of the way of objects, swiping down to slide under object, and swiping up to jump over objects. The objects may vary in these games but the general gameplay is always the same – that doesn’t mean they’re not a lot of fun, they are.

The story mode is something little bit different. When you’re playing this mode, you still play the same game, with the same rules, but you’re doing it with a specific purpose. At the start of each section you’re given a mission, for example collect four hot dogs, and once you’ve completed that mission your ride’s over and it’s time to move onto the next mission. I enjoyed the great cartoon graphics as they are quite realistic when compared to the actual show – which I’m sure is very important for the fans. 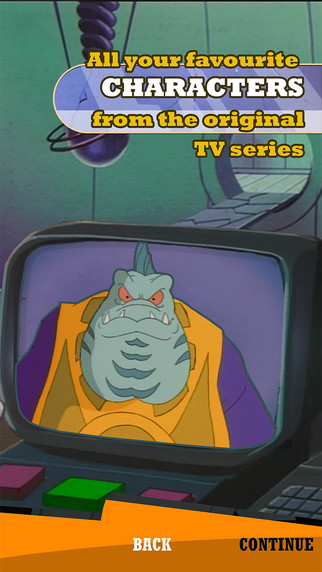 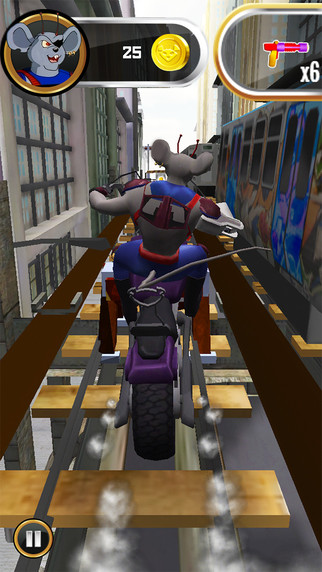 If you’re a fan of Biker Mice from Mars then you’ll probably enjoy this game. It does stand out a little from the average endless runner game because it also includes a story mission mode and this does add an interesting element of depth to this type of game. If it wasn’t for the fact that the game has a tendency to freeze on occasion or become unresponsive it would be much easier to give this game a higher rating.