WordSpace! app review: a fun word game for everyone 2021

Everybody in my family loves word games. I remember growing up and word games were always an essential part of our lives as we often sat around the table on a Sunday evening playing Scrabble.

These days, most of my word games are played in electronic form, but the principle is still the same – they challenge your mind and keep you on your toes.

I’m always on the lookout for new and exciting word games and WordSpace! is a great new addition in the word game category. The idea behind this iPhone app for word games is to keep things easy enough so as not to discourage people from playing the game.

That doesn’t mean it isn’t challenging – just that it is solvable. There’s nothing more frustrating than a word game that seems impossible to beat! This is a free app and it’s compatible with the iPhone, iPad, and iPod touch.

Let's dig deeper into this app through our WordSpace app review and see if it's the top word game app for iPhone . 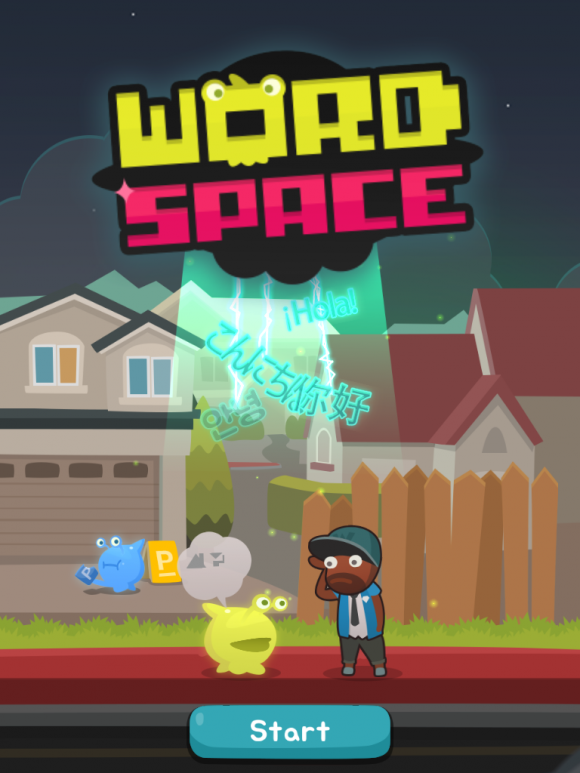 WordSpace! is the creation of a South Korean company called Blue Wind. They’ve been around for quite a while as their first online mobile games were released way back in 2005.

In the 10 years since they got their start in the mobile gaming industry, they’ve created quite a few apps for the iOS platform. They specialize in simple, family oriented games that appeal to different age groups.

Some of Blue Wind’s popular titles include Jelly Pop, Puzzle Village, and Thief Lupin. According to the developers own statistics, Thief Lupin has actually been downloaded by more than 6 million users worldwide. That’s a pretty impressive statistic and a great endorsement for the reliability and popularity of Blue Wind’s apps.

While Blue Wind’s main focus is on gaming apps, they do have a few apps in other categories. Perhaps the best example of a non-gaming app that they’ve produced for the App Store is their Battery LED app. This is a simple app designed to let you know when your phones battery is fully charged. 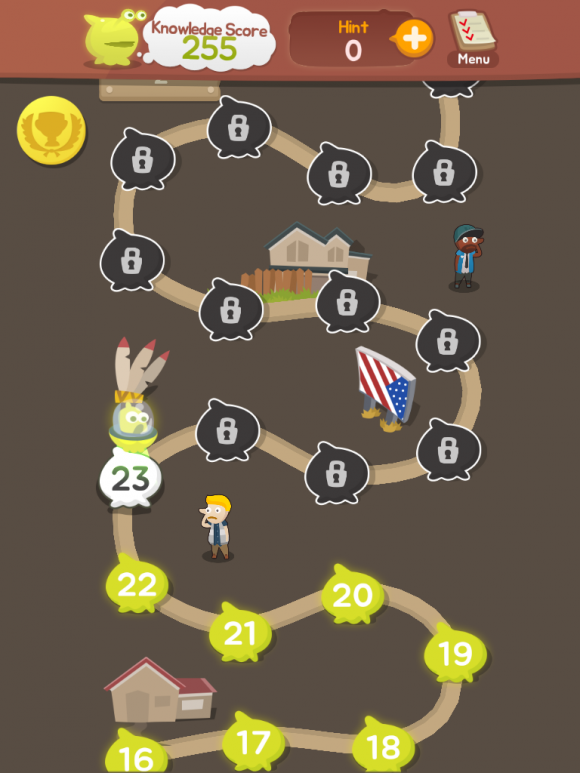 If you’ve owned a smart phone for any length of time you’ve probably played more than one or two word games on it. It’s no exaggeration when I say that these games are some of the most popular items in the App Store.

With all this competition, it becomes a challenge for developers to come up with anything new so that they can stand out from the crowd. WordSpace! does a pretty decent job of separating itself from other word games as it keeps things simple and throws in some fun graphics and some cheesy background music that actually works quite well.

The cute little cartoon graphics that are the backdrop of this word game are a lot of fun and gives the game an extra flavor that’s quite appealing. There’s also a great walk-through of the app that explains the games rules before you get started – they’re not complicated, but they are a little different from other word games so an explanation was a nice inclusion.

The game doesn’t bombard you with ads or in-app purchases, but it does advertise its own apps when you first boot it up. You can obtain more hints in the game through in-app purchase, but these aren’t necessary to complete the game.

The only thing that really bothered me with this game is that it takes a little while to boot up and during the boot up process the screen goes completely black which is a little disconcerting. This app will require 70.3 MB of available space on your iOS device. 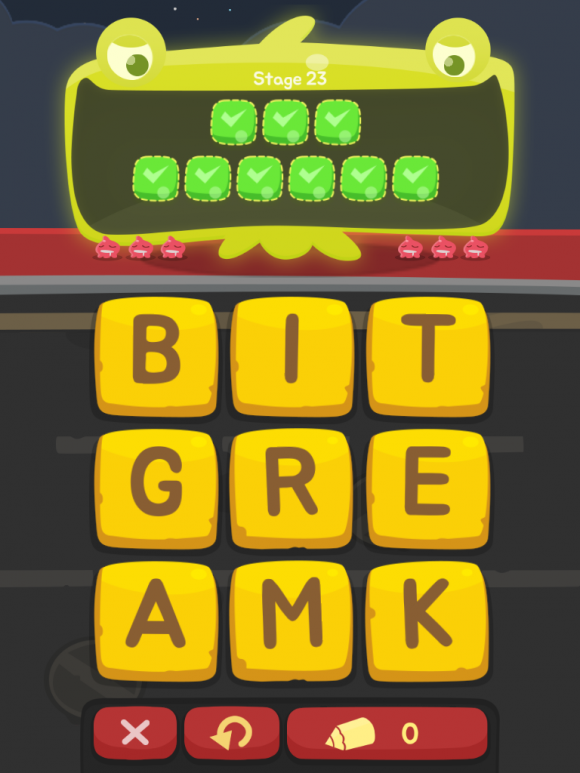 WordSpace! is a solitary word game – it’s not something you play against opponents. It even has a nice background story in which each word puzzle you solve helps to increase the vocabulary of an alien visitor named Chuchu so that he can explain to you why he came to earth in the first place. It’s not really a necessary ingredient for the game to work, but it’s a nice little detail nonetheless.

This game isn’t exactly like Scrabble, or a crossword puzzle, as the letters aren’t necessarily in any particular order. For example, in the first couple of stages each puzzle presents you with four letters and you have to connect them in the right order to form a word.

You do this by dragging your finger across the screen connecting each letter of the word you wish to spell. As you progress through the stages you’ll notice more letters and words are added to the puzzle. It never gets overwhelmingly challenging, but it’s challenging enough to be a lot of fun.

If you run into a word that simply has you stumped you do have the option of tapping on the hint button to reveal the first letter of a word.

You can only use this seven times during your game though and after that you have to rely completely on your own thoughts. This is a game that will take you hours to complete as it has over 400 stages. It’s a great way to kill a couple of extra hours on a Sunday afternoon.

What really captured my imagination in this game was its cute little cartoon character aliens. They influence every aspect of the game and even the puzzle frame that you’re trying to solve is set inside an alien’s head and he has some weird googly eyes. It’s a lot of fun and it’s one of those little details that really helps to give this game its own character. 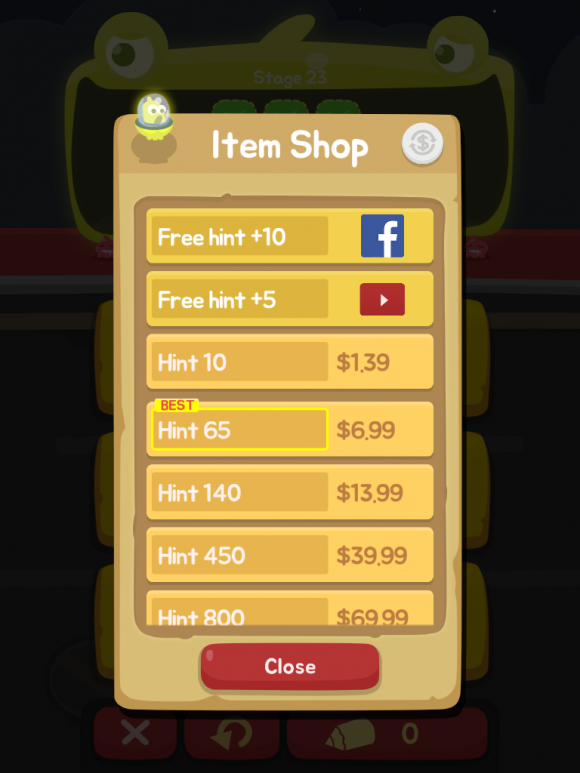 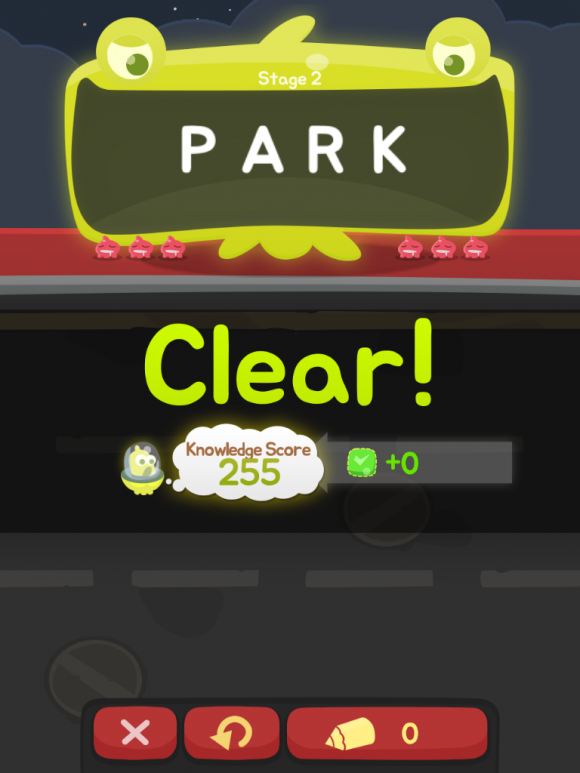 WordSpace! is a pretty decent effort in the word game category. The puzzles aren’t overly challenging, but they’re challenging enough to make this game a good little time waster. I also loved the cute cartoon graphics and the cheesy music which really gave the game a lot of character. If you’re looking for another great word game to kill a few hours, when you have some spare time, this is a great choice.