Sport TV Live app review: watch free sports from all over the globe-2020

As an avid soccer fan I was ecstatic when I discovered this sports TV app as it’s truly a revelation. It’s often difficult to find all of the major European soccer games on North American TV so if you’re a soccer lover like me you’ll absolutely love this live sports app.

It’s not just for soccer though – the channels included in this app feature a variety of sports from right across the globe. In North America we love our sports, but so does the rest of the world – it’s just that they like different sports. I’m a firm believer in the phrase that "variety is the spice of life" and if you share that sentiment then you definitely have to have this app.

With this app, you watch sports all day long, stream live sports, enjoy sports highlights, get daily sport news, check out match previews & predictions. This is a free app and it’s compatible with the iPhone, iPad, and iPod touch. Check out our review for more details. This app was created by a company called Appsvilla Inc. and they’re actually quite a prolific app developer with about 36 different apps available in the App Store to date. Most of their apps are devoted to different TV channels, but they do have some different types of apps as well. Some of their different apps include photo editing apps, news apps, and e-book readers.

Sport TV Live was one of about a dozen TV viewing apps that they released in 2015. As relatively new apps, they’re still adding channels to their lineups, so the Sport TV Live app still has a lot of potential for growth.

This company’s level of productivity is actually quite impressive when you consider that they only released their first app in 2013. If you do the math, that means they’re averaging about 12 apps released per year. It will be interesting to see what they come up with next. This is definitely a developer I’m keeping my eye on. 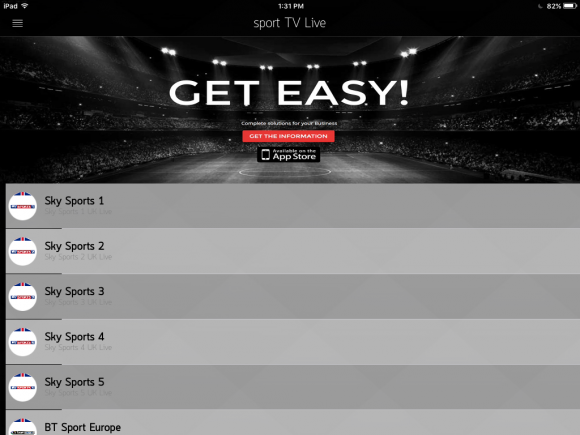 To be honest, I’ve been looking for this type of app for quite a long time, but they simply haven’t been available. There are apps in the App Store that provide links to various online videos, but they don’t allow you to tap into real feeds from actual TV channels around the globe. That makes this app a bit of a game changer as it allows sports enthusiasts to access channels that would otherwise not be available to them.

The one thing that is really annoying about this app though is its prolific use of pop up ads. Every time you access a new channel you have to first watch a five second add from one of their sponsors. That wouldn’t be such a bad thing, as it’s understandable that the app’s creators have to make some money somehow, but the problem is that these ads often have a tendency to hang up the app and cause it to crash.

The other thing that’s somewhat annoying is that some of the channels have a tendency to buffer frequently – this makes it difficult to even watch them. This app will require 21.1 MB of available space on your iOS device. This is a fairly straightforward app to use and doesn’t really require a large learning curve. When you run the app for the first time you’ll be asked to allow push notifications and while they try to promote this as an important facet of the app they don’t really add much value. If you want some live score updates you may want to allow these, but personally I didn’t really see a need for them.

Another thing you’ll have to do the first time you use the app is to update the channel list. This is an automatic process though and you’ll be prompted to do it before continuing. The speed of this process actually impressed me quite a bit as it was almost instantaneous. I use a couple of other apps that require periodic channel updates and in those apps there tends to be a rather long lag while you’re waiting for the channels to update – it’s quite annoying.

Once you have these initial startup processes out of the way, using the app is refreshingly simple. The channels are presented in a simple list format that you can scroll through until you find a channel you’re interested in checking out. There are over 60 different channels to choose from and I only found one or two that didn’t work.

Video plays at the best quality available on your device - watch sport events up to full HD 1080p. Sports includes football, motorsport, fight sports, American football, baseball, tennis, basketball, rugby, darts and much more stream live sports. As we’ve already mentioned, one thing that really bothered me was that there is a bit of buffering that goes on sometimes which can make certain channels difficult to watch.

To view a channel all you have to do is tap on it in the list and it will automatically boot up. After you get through the annoying pop up ads the channel will start to play automatically. The picture quality of the TV channels is amazing!

All channels can be viewed in full HD quality and if you have an Apple TV there’s also a link that makes it easy to send the picture to your Apple TV with a simple tap on your screen. This allows you to watch the big match on your big-screen TV.

The built in media player that’s used to watch the channels is very basic. There is a simple play/pause button and there’s a volume button – that’s it. In all honesty, that’s all you really need and I actually liked the fact that they kept things simple. 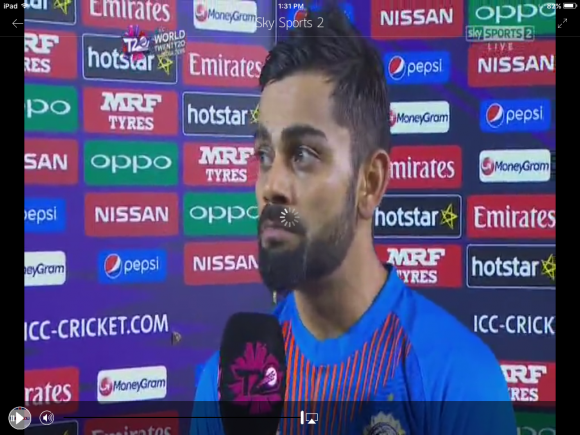