In an average week people spend a fair bit of time online (most of us, anyway) and in that time we will receive hundreds of emails and there’s nothing more frustrating than trying to keep up with them on a regular basis. It doesn’t take long for your inbox to become completely cluttered. I know from my own experience that if I neglect my email for a day or two it can become a bit overwhelming and definitely very frustrating. The native email app that comes with the iPhone is okay, but it’s not highly intuitive and I keep wondering why there isn’t something better. It turns out there now is: Zero’s an email client app that works with your existing email such as Gmail, Yahoo!, Hotmail, and Outlook, among others. It’s extremely easy to use and makes organizing your email inbox almost effortless. This is a free iPhone email app and it’s compatible with the iPad and iPod touch.

The best email apps for iPhone Zero was developed by a company called Mailfeed, Inc. based out of the San Francisco Bay Area. Unlike a lot of developers that seem to churn out app after app, the people of this company have focused their attention on the Zero app and it seems to have worked well for them as they’ve created an email service that’s simply one of the best I’ve ever come across. As we’ve alluded to above the native email application that comes with your iPhone does a decent job, but it leaves something to be desired. The developers of Zero recognized this fact and decided it was time to come up with something better.

Mailfeed, Inc. is not a large company because as far as I can tell, it’s run by two guys: Gevorg Karapetyan and Alexander A. Volkov. What this company lacks in manpower they certainly make up for in brainpower. Karapetyan has a Master’s degree in Informatics and Applied Mathematics, as well as a Dr. of Philosophy in Digital Signal Processing. With that kind of background it’s not surprising this small company was able to develop one of the best email client apps on the market.

The developer says what makes Zero unique is that it has a built-in algorithm for self-learning and over time it actually learns your habits and sorts your email in order of the importance that you attach to them. It doesn’t matter what email client you’re using as this process works for just about any of them. This key component of the app gives Zero a huge advantage over its competitors. 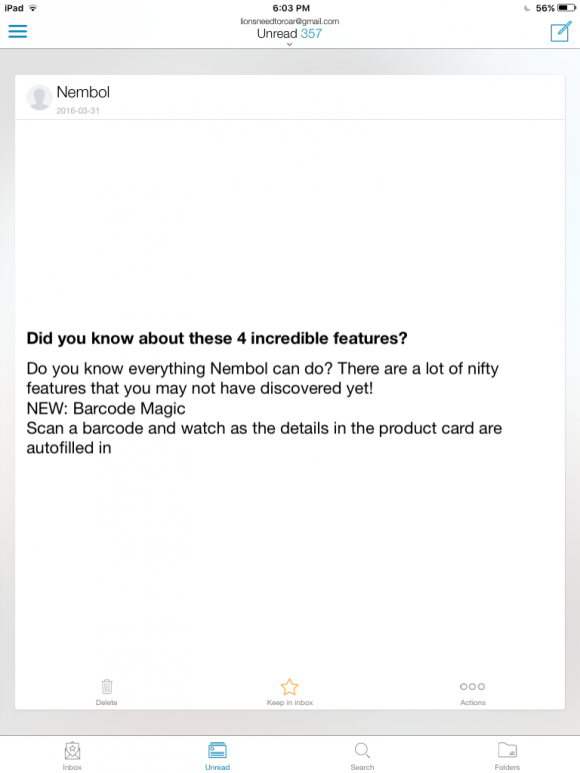 Apart from the native iOS email client I’ve also used Microsoft’s Outlook email system on my iPhone and while I do find it’s a little better than the native email application it still leaves something to be desired. There’s no doubt that they’ve made some great improvements that make organizing your email easier, but every time I use it I still get this nagging feeling that something’s missing and that it could be a little bit better. The first time I used the Zero email app I realized just how much had been missing from these other applications. Zero, put simply, is the easiest and most user friendly email app I’ve ever used on an iPhone.

This app is completely free: there are no ads or in-app purchases which I think most of us like to avoid in an app if we can. The developers also stress the fact that it does not store any of your email information on their own servers, which was a relief as it’s sometimes worrying signing up for a new app wondering if your privacy will be protected. Its user interface won’t look unfamiliar if you’ve used any other email client, but you will see some advanced features which you won’t find in other email apps which are a welcome addition. This app will require 69.5 MB of available space on your iOS device. 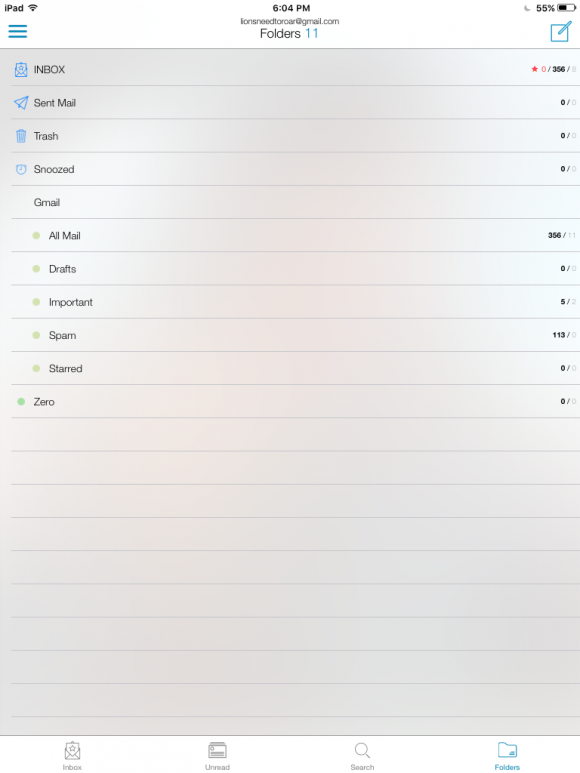 To get started using Zero as your email client you’ll have to first sign into your existing email account whether that be Gmail, Yahoo, Outlook, or something else, and enter your credentials. Once you’ve done this though you won’t have to keep doing it unless you decide to add another email account to be used within the app. This only takes a couple of seconds to set up and then you can start using it as your main email client.

What’s really impressive about this app is how nicely the user interface is laid out. Each unread email has its own preview card in your mail feed which includes a title as well as a preview of the emails content. There’s obvious separation between each email and your mail feed is organized with each day separated clearly as well. Other email clients simply lump everything together and you don’t know when the email was sent and how old it is without going into the email itself.

Where this app really stands out is when you want to organize your emails. If you swipe left on any email a list of different color coded tools is laid out in front of you and you simply tap on the one that’s appropriate. These tools include: flag, read, snooze, move to, and delete. The reason they’ve called their app Zero is because of how easy it is to delete all of the junk in your email and reduce your inbox down to zero.

There’s also a great tool bar at the bottom with other options for organizing your email such as a viewing unread emails, a search function, and a folder view option. Also, if you want to sync your inbox with your account at any time you can simply pull down on the list for a second and release. Essentially they’ve made this app as user-friendly as possible. 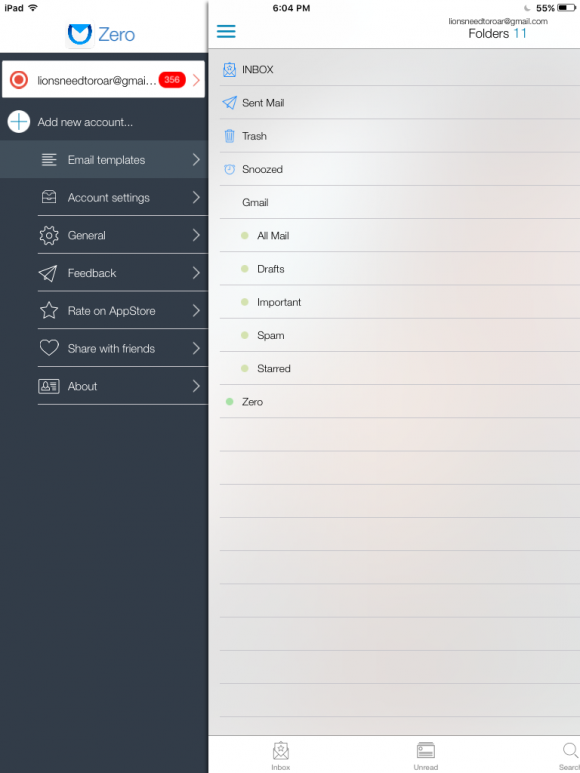 Zero has really raised the bar for email client apps. It’s got a great user interface and makes it simple and effortless to organize your emails within seconds. With this app you’ll no longer have to be worried about a cluttered email inbox. It's an amazing email organiser app!