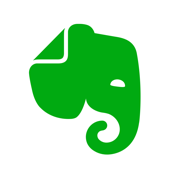 Evernote by Evernote is a productivity app that will help you stay organized, jot down your lists and ideas, and remember everything across all of your devices and computers.

The app lets you create to-do-lists, take photos, write down notes, record voice memos, and then allows you to search and edit them from your iPhone, iPad, Mac, PC, or any device upon which you have the app installed. It’s that easy.

The app is free, but you can upgrade to Evernote Premium for $5 a month or $45 a year. The premium version allows you to access your notes offline, allows others to edit your notebooks if you allow them, and adds a PIN lock to your app.

I adore Evernote. It’s one of the very first apps I always install on any new device or computer, and I use it daily.