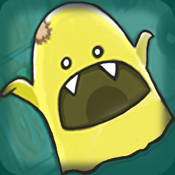 The Creeps! by Super Squawk Software LLC is a tower defense game that has you building towers and defenses to stop wave after wave of creeps from reaching their goal.

The Creeps! is a lot like your average tower defense game but has a very original feel to it. You will start off with most of the levels locked, and will have to successfully beat each level to unlock the next. Once you have picked your level you will start out with some money and a predetermined path that the creeps will take.

You will need to position your towers along the path to do the maximum damage possible. One of the unique features is using your turrets to destroy objects blocking your deployment of future turrets, such as rocks and trees. You will earn money from killing the creeps, but be sure to spend it wisely as it will run out fast.

As you progress levels you will unlock new and fascinating towers, new creeps, and monsters to fend off. A couple of the notable fixes for this update include a bug that caused two endurance levels to play in survival mode and a bug causing game to auto rotate even when accelerometer controlled towers were active.

The Creeps! was updated to Version 1.12.1 on January 26, 2013. It has a total of 25,434 customer ratings with an average of 4.5 out of five stars. Feedback has been overwhelmingly positive with most everyone agreeing this is one of the best TD games for the iOS.

One of my favorite aspects to this game is the fun, innovative UFO tower, and the use of the accelerometer. It is one of the reasons I can’t put this game down and I keep coming back for more!

For: iPhone, iPod touch, iPad with ioS 4.3 or later