Flight simulator games have been stimulating the imaginations of children and adults since the first one was released way back in 1979. They’ve come a long way since then, as basic grids and black and white patterns have been replaced by realistic backgrounds and fine detail. These days simulators don’t just try to reproduce a cockpit and some basic scenery they try to make the experience as realistic as possible. You’ll find everything from snowcapped mountains to seagulls flying by your plane – if you’re really into aviation it’s a great way to get your fix.

There are a lot of free flight simulator apps out there, but the problem I’ve found with many of them is that their mission plots are often confusing or entirely lacking. One particular flight simulator app that seems to have some good promise is Flight Pilot Simulator 3D. You can use this app for free, but there are also a lot of potentially expensive in-app purchases available – you can obtain a lot of the upgrades for free as well, but it will take you a long time. The app is compatible with the iPhone, iPad, and iPod touch.

Before we delve too far into this review you might be interested to know that the developer of this app, Fun Games for Free, also has a lot of other fun free apps in various different categories. Some of their more popular titles include Sniper Shooter, Jelly Jump, and Celebrities Fun Challenge. As you’ll find with the flight simulator app we’re reviewing here a lot of their apps do have in-app purchases.

The graphics in this simulator aren’t state-of-the-art so they won’t blow you away, but they are pretty decent. The landscapes are fairly detailed with snow patches on the mountains, lights on the runways, and the rippling of waves on the water below you. You won’t notice any fine detail on the buildings below, but the graphics are certainly realistic enough to help immerse you in the game.

The same thing goes for the sound effects – they’re pretty good but they won’t blow you away. When you’re driving a propeller controlled Cessna you’ll hear the constant hum of the propeller and if you crash you will hear what passes for explosion noises. These aren’t Hollywood special effects by any means, but it’s still a fairly fun experience. 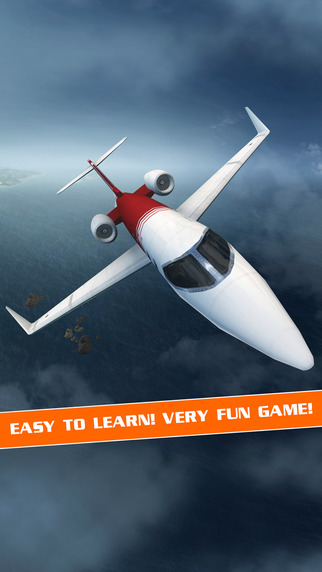 The controls are very basic and easy to use – at least in the free Cessna that you automatically have access to. There is a simple gearshift for acceleration, a button you can press to double the speed of the plane, a set of brakes, and you simply tilt your device up down and side to side to move the plane in various directions. There were no complicated control panels to work with in this basic free plane, although it’s possible the controls might get somewhat more advanced when you purchase a more advanced plane.

When you use the simulator for the first time you’ll take part in a simple training mission designed to help you learn the controls and figure out how things work. You do receive coins for completing this training mission successfully which will allow you to unlock other missions. Each mission includes clear-cut instructions of what the objective is and as you progress through the mission you’re instructed if you waver off course. Each mission gets progressively more difficult, but the one constant that’s present throughout is a clear set of instructions that makes your objective easy to understand.

As you move through the mission you’ll also receive constant updates on the mission’s objectives – especially when you’re getting close to your objective. This will allow you to make course corrections to adjust to changing conditions and prepare you for any quickly maneuvers that might be necessary as you approach your objective. 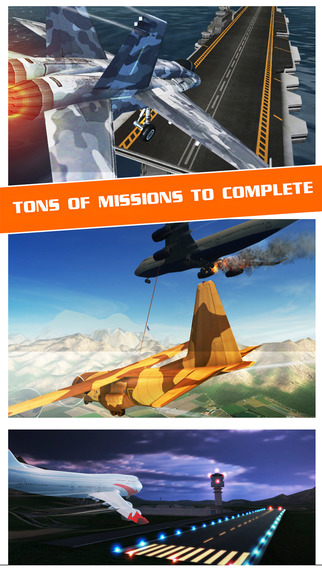 Each mission requires a certain amount of coins before you can access it and the easiest way to collect coins is by participating in the free flight simulator. This is essentially an open simulator with no particular objective other than collecting coins by running through balloons and landing at airports for mission information. You can use either your own eyes to search for your objectives or you can use your radar.

The biggest drawback with this app is that all of the coolest planes and most interesting missions are locked unless you’re willing to access them through in-app purchase. There are some planes you can purchase by collecting enough coins, but you need quite a lot and it still doesn’t allow you to access all of them which was a little disappointing. On the positive side it is completely free of ads so some requirement for in-app purchases was probably inevitable.

What really impressed me about this game was that no matter which mission you’re in there were always clearly marked targets to mark your mission objectives. In many other flight simulator games the course objectives are not so obvious and it doesn’t take much to leave the user feeling a little frustrated. That’s not a problem in this app at all.

While the restrictions you face in the free version of this app are a little frustrating, they’re certainly better than putting up with a game that’s loaded with ads. You can unlock a lot of the advanced options through good game play, although you will have to be patient. It really is quite a decent effort in the flight simulator category and you’ll have a lot of fun even in the limited free version.