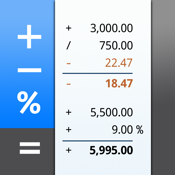 Calculator apps don’t usually get anyone too excited as they’re all very similar and, with apologies to the math lovers out there, most people aren’t too excited about numbers in general. Many of us do use our calculator apps on a fairly regular basis, but always as an afterthought – we don’t generally think what an awesome app, I can’t imagine life without it! This is probably true of all productivity apps so it’s not a real knock on calculator apps per se – it’s simply a statement of fact.

The best calculator apps for the iPhone

As it turns out there may actually be an app that might make me rethink my opinion on calculator apps as well as the opinions of a lot of other people. CalcTape is an innovative calculator app that will remind those born before 1985 of those old fashioned calculators with the paper tape rolls – I used to love those as they made it easy to keep track of all the calculations you had performed and to quickly go back and check your work any time you wanted. This app brings that same type of functionality to your iOS device. It is a paid app that will cost you about $2.99, but for the level of functionality it offers that will seem like a small price to pay for many. It’s compatible with the iPhone, iPad, and iPod touch.

As we’ve briefly alluded to above there was a time when calculators were a separate physical entity and they needed paper to work properly. This app doesn’t use paper, but it does allow you to save as many calculations as you like for later viewing which really does give you that retro calculator feel.

One other thing you can do with the window on the left-hand side is take advantage of a scratchpad tool that allows you to quickly workout minor calculations before returning to the main calculation you’re working on. It’s an extremely useful little tool which really adds to the functionality of this app – it’s a very well organized and professional app so it’s not surprising that it was created by a German software company, Schoettler Software GMBH, with a reputation for working with some of the largest companies in Europe on their software solutions.

There are occasions when it would be nice to include notes with the calculations so that you can remember at a later time exactly what you had in mind and you can do that with this app by quickly switching over to the alphabetic keyboard and tapping on the line where you want to leave the note. All you have to do then is type out your note and carry on with your calculations.

Set Tax Rates and Other Functions

It would be surprising if the tax rates for your jurisdiction weren’t somewhat different from the tax rates in my jurisdiction and this app has you covered in this regard as well. The main keyboard includes a quick access button for calculating tax, but if you want to change the tax rate that it works off all you have to do is tap on the button and hold it for a second and an edit screen will appear that lets you do that. You can also use this function for changing how other keys react to your inputs as well.

When you’re performing advanced calculations there’s a good chance you’ll want to save that information and share it across your various devices. This app allows you to do that as well using iCloud over your various iOS devices and your PC.

There may be times you want to share your calculations with coworkers or family members and you can do that as well by tapping on the sharing icon and selecting the mail option that pops up. When you do this the app will automatically open your email application and allow you to send it to whoever you want.

If you have your iOS device connected to an air printer you can also print out your output as well. This is simply another option when you tap on the share function that you can choose instead of email.

Where are the Instructions?

While there is no doubt in my mind that this is one of the best calculator apps I’ve ever worked with, I was very disappointed to find that it doesn’t include a detailed help section to explain some of the more complicated functions to you. It’s relatively easy to figure out with a little bit of trial and error and if you do get stuck there are some instructions under its iTunes description in the App Store, but it would’ve been a lot easier if they’d at least included a FAQ page in the app.

After using this app for a couple of days, I can comfortably say it’s got everything I’m looking for in a calculator app. The fact that you can save your calculations and view them later, as well as viewing each line of the calculation step-by-step, makes this one of the most user friendly calculator apps out there. I also liked the ability to leave yourself notes in the margin. If you find yourself using a calculator on a fairly regular basis and you want to be able to check your calculations later then this app is well worth the small price tag.