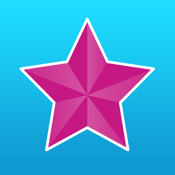 Video Star by Frontier Design Group uses your iPad to turn you into the ultimate video star.

Create your own fabulous music videos and share them with your friends and family with the help of this app. All you need to do is pick a song from your own music library and you're ready to start filming your video.

Now granted you could just start filming and you'll end up with a great music video, but why not pump it up and add some effects. The app gives you hundreds to choose from that you can add before you start recording, during, or even after you record.

Just like in a real music video shoot you can pause and set up a new scene, change your costume, whatever you like. You're able to shoot as many scenes as you want, so go ahead and get creative.

You can purchase additional Power Packs that give you even more effects such as the real-time "green screen" effect. To make sharing easy, YouTube uploading is featured right in the app. Maybe you'll end up being the next Justin Bieber!

Video Star was updated on Feb. 7, 2013 and has 156 customer ratings with an average rating of four and a half out of five stars.

I thought this app was a lot of fun. Think how great this would be to play around with when you’ve got a few friends over and then share all your hard work on YouTube.