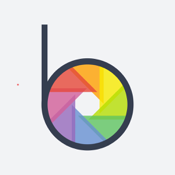 BeFunky Photo Editor by BeFunky is a photo transformation app that enables you to add an unlimited number of effects and filters to your images, easily tweaking and customizing as you go along.

Included in BeFunky are over 30 different effects such as Cyanotype, Gritty HDR, Instant, Old Photo, and Pop Art. There are tons of more familiar features on offer also, such as crop, rotate, and sharpen, as well as the option to edit hue, saturation, and so much more.

Capture your creations in one of the funky frame styles, including Film Strip, Halftone, Grunge, and more.

BeFunky Photo Editor was updated to version 3.0.1 in mid-December of 2012. The current version has a total of 2975 customer ratings with an average rating of 4.5 out of five stars.

This one of the coolest photo editing apps for jazzing up some otherwise dull pictures. Those of you who love to share your photos on Instagram will have a field day with the amount of filters and effects that are available on BeFunky.