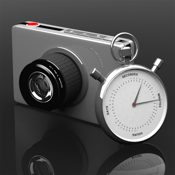 iiMotion by Fingerlab is a fun photo and video editing app that features stop-motion and time-lapse capabilities to be used on your iPad. In a nutshell you'll be able to take photos, edit your video, and then export HD 720p videos to YouTube or right to your device with this videoshop app.

Stop-motion is explained as an animation technique that makes it look like an object is actually moving on its own. Time-lapse is a cinematography technique which works by speeding up movement.

Other features in this video editor app include an incredibly fast preview render, four modes to capture in (manual, microphone, time-lapse, and WiFi remoted), and a variable frame playback rate. You can edit videos on iPhone like never before.

Both landscape and portrait is offered, photo and video export is supported (photo library, Facebook, Email, and iTunes Sharing Folder). YouTube and Facebook shares are a direct upload, you get an auto-save feature, the app supports Retina display, and you get an unlimited movie size.

The shooting speed should also be mentioned as the app offers up to 10fps on select devices (iPhone 5/4S/4 and iPad 3/4). There are even capture tools such as manual focus, grid, and onion skin to help you out.

This video editing app was updated on Jun 26, 2020 and currently has more than seven hundreds customer ratings with an average rating of four point four out of five stars. Users praise stop motion and time lapse creation functions as they allow being really creative about what you make and helping to learn new techniques. You can also look at the gallery on there and see what other creators who use the videoshop app have made and take inspiration from that.

I was really impressed with the results this app offer. As well, even with the large array of features offered the app still remained easy enough to use. I liked how easy it was to then share my creations after I made them with the direct upload to Facebook and YouTube options.