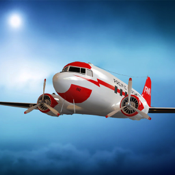 Flight Unlimited Las Vegas by Flight Systems LLC is a flight simulator game for your iOS device. It’s free right now, so get it quickly.

This app is the second installment in the series and is best played on an iPhone 4S, iPhone 5, or iPad with Retina display. Anything less will give you a less than stellar experience.

The game has visuals that can go up against any console or desktop flight simulator and come out an equal.

You can pick from one of five aircraft and fly over the city of Las Vegas: there is more than 130 square miles is modeled for you to fly over and see, including more than 50 hotels done in amazing detail. You’ll see the Bellagio, the New York New York, and the Luxor. Check out the street traffic, too! Not many flight simulators give you that sight.

You get full rudder controls as well as brake, gear, and flap controls. You’ll enjoy the graphics of water splashing, tires smoking, and engine fires. Don’t crash, though, because you’ll see your wings ripped off, bends in your plane’s metal, and engines separating from the planes in some cases.

There are four different camera views: Chase, Tower, Cockpit, and a customizable one that you can set up yourself.

Flight Unlimited Las Vegas was updated to Version 10.4 on February 6, 2013. The update enhanced satellite imagery and added calibration options to the pause menu. The app has a total of 592 customer ratings with an average of four out of five stars. Feedback is positive.

I’m not a fan of this type of game, but my husband is, and he absolutely raved over this game. He said it

was as good as his desktop simulator and even offered features his game doesn’t have.